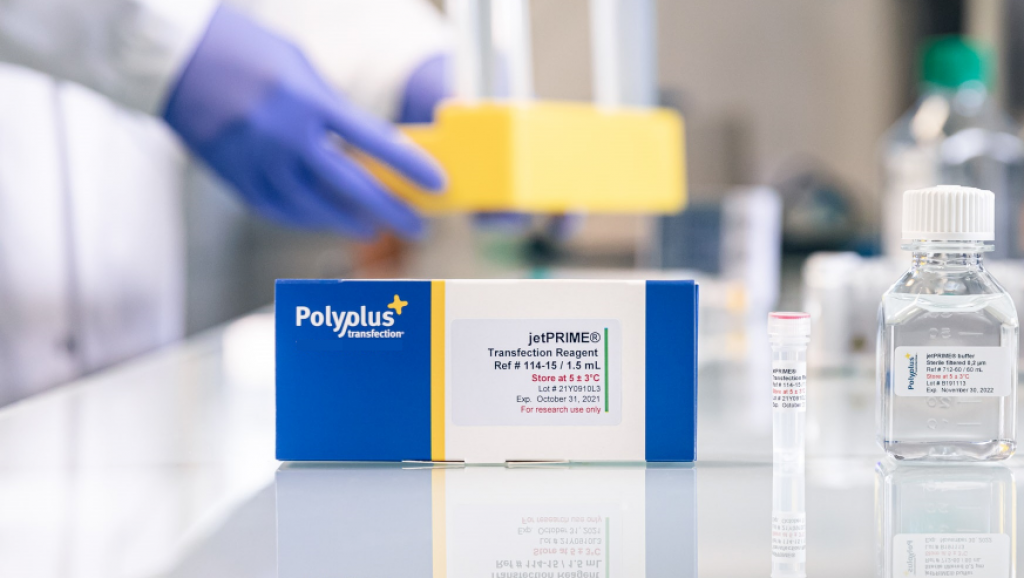 jetPRIME® is a powerful and versatile DNA and siRNA transfection reagent for day-to-day experiments that leads to efficient and reliable scientific results. jetPRIME® ensures high DNA transfection efficiency and excellent gene silencing in a variety of adherent cells. jetPRIME ® is also ideal for DNA/siRNA co-transfection or co-delivery of several plasmids. Furthermore, our jetPRIME® reagent is very gentle on cells since it requires low amounts of reagent and nucleic acid during transfection.

1.5 ml is sufficient to perform ca.375 transfections in 6-well plates. Bulk quantities are available upon request. Please contact us. 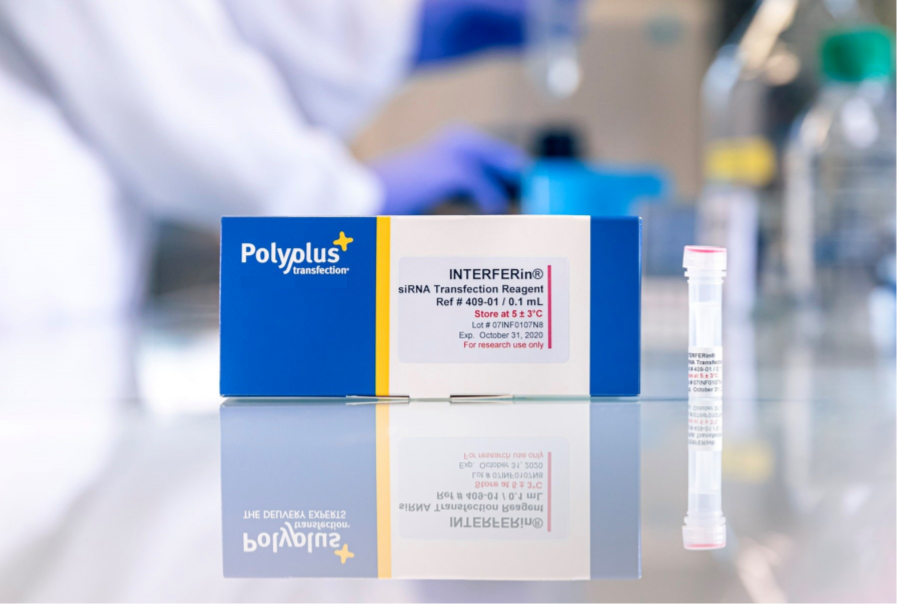 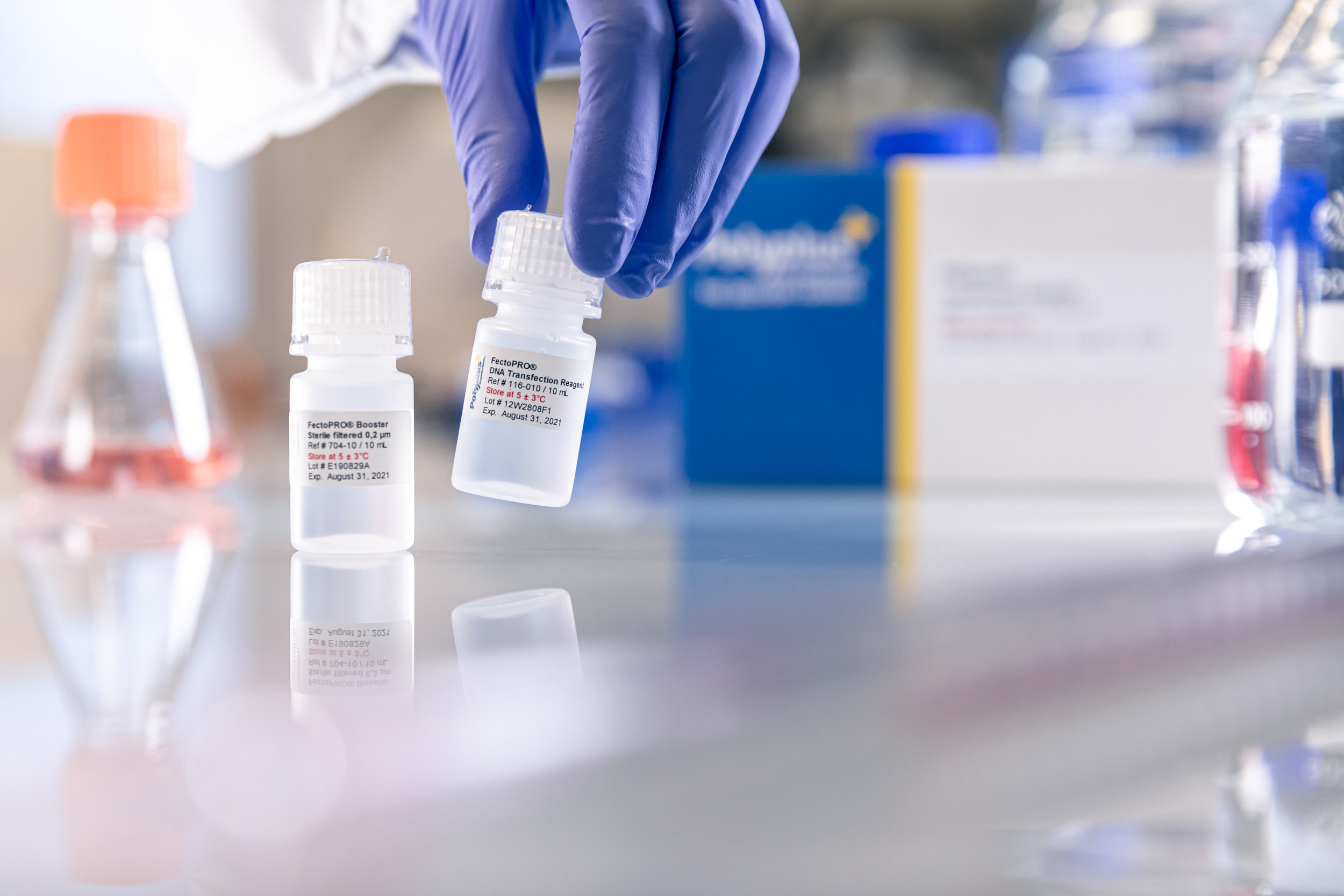 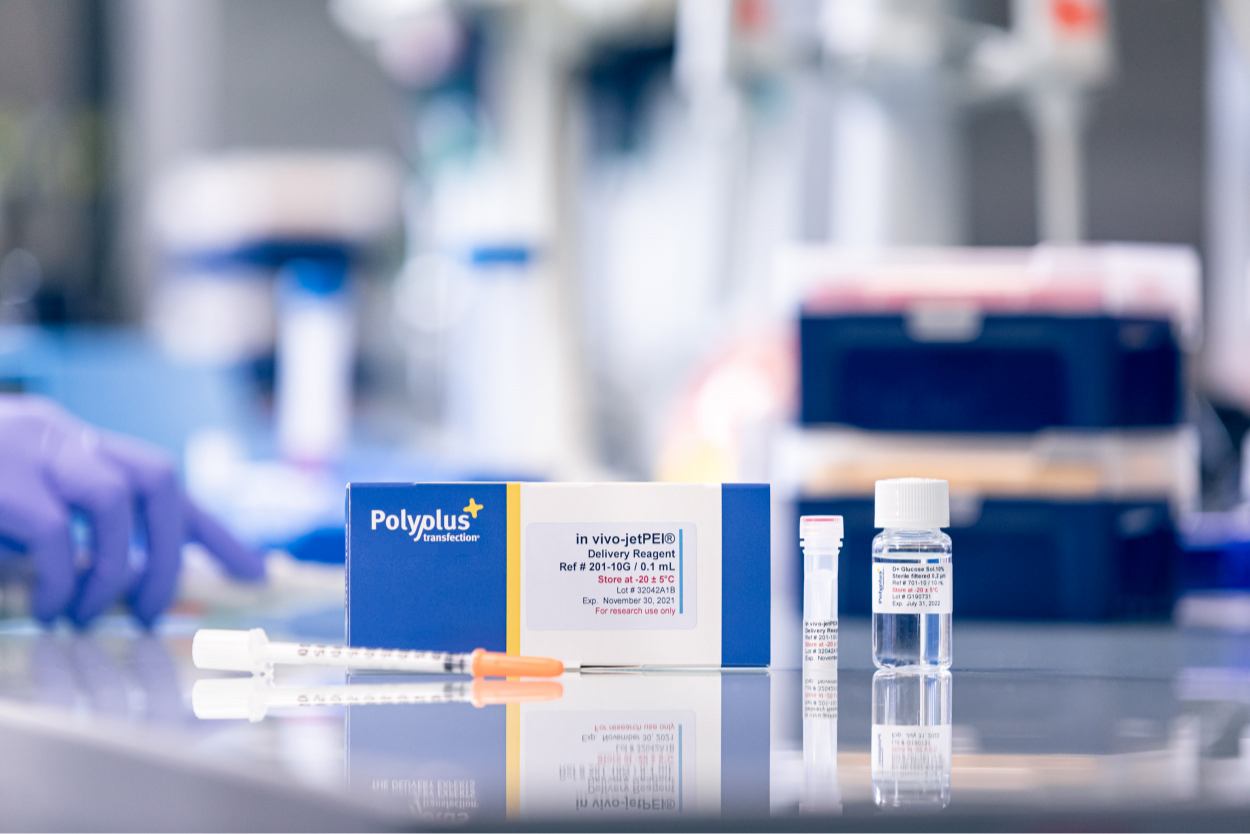 jetPRIME® is a powerful transfection reagent for day-to-day experiments. It leads to unusually high percentage of transfected adherent cell lines of various origins as well as primary cells. 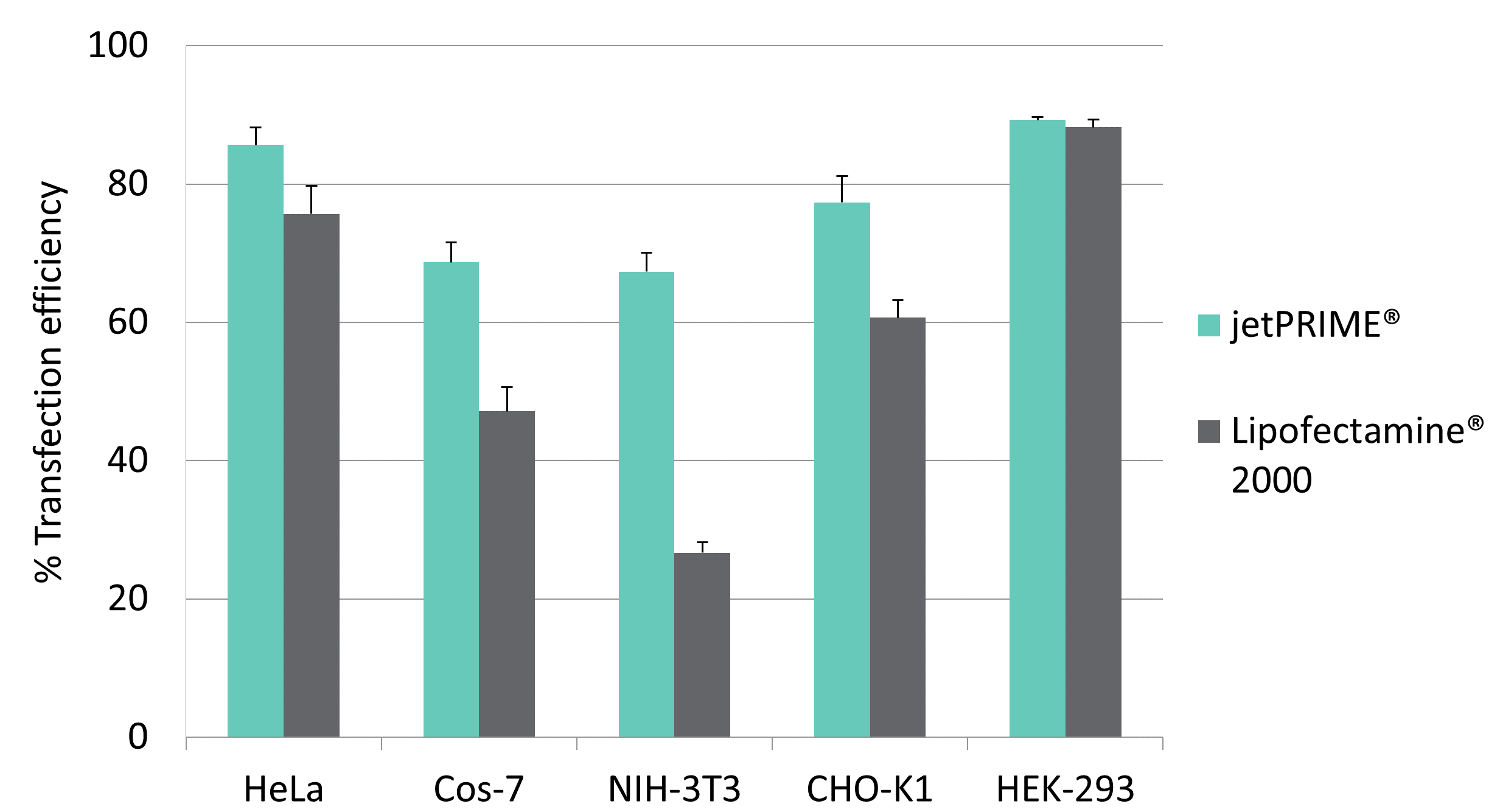 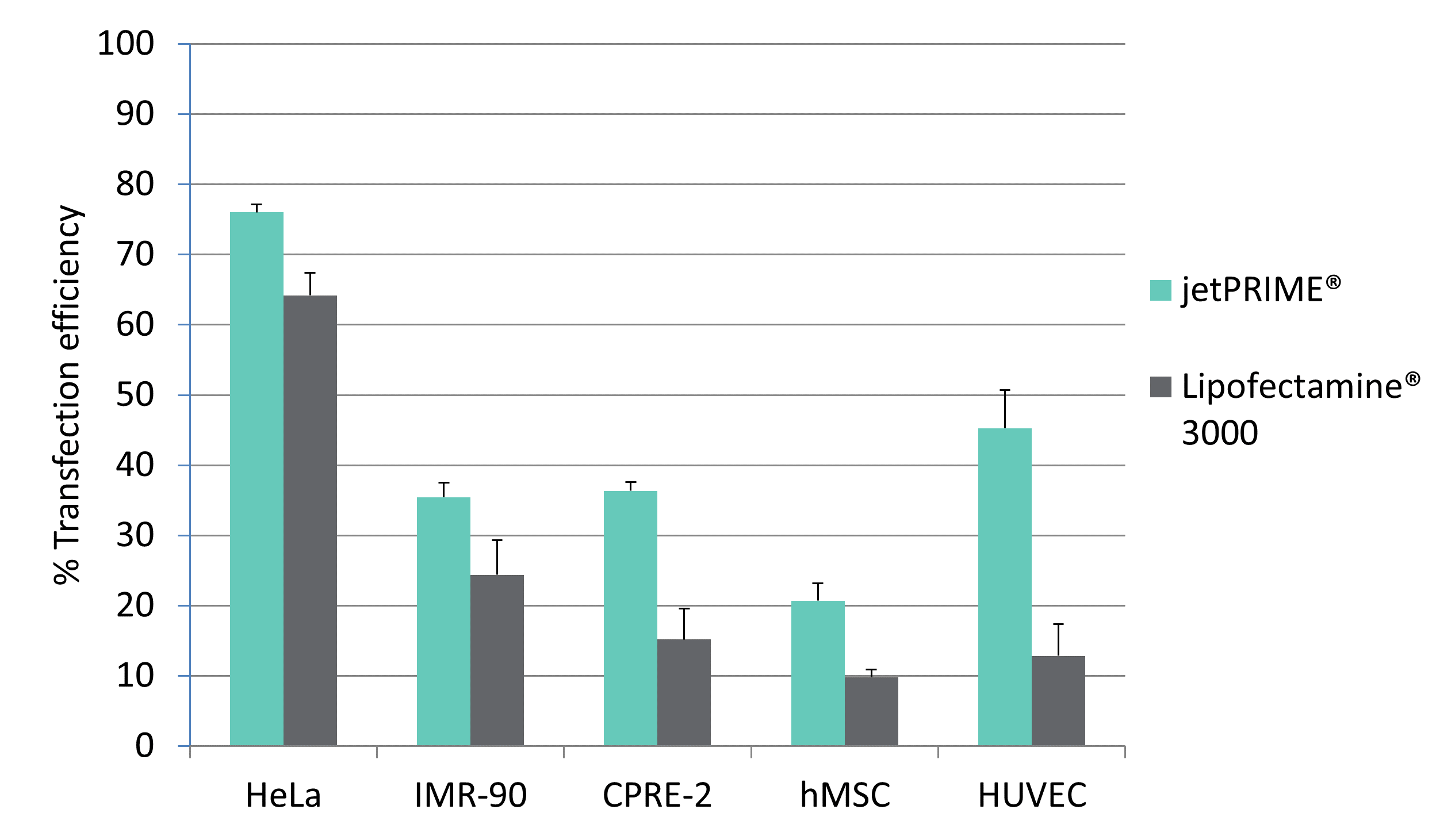 jetPRIME® is a powerful in vitro transfection reagent that requires a small amount of reagent and plasmid DNA, making its use very cost-effective (Table 1).

Table 1: Recommended conditions to use. Amounts of DNA and reagent (jetPRIME® and competitors) per well in 6-well plate for transfection according to manufacturers’ recommendations.

jetPRIME® is extremely gentle on cells during transfection leading to increased cell viability and improved transfection results. Cells transfected with jetPRIME® are healthy, while major cytotoxicity is observed with competitors (Fig.3).

Easy to use protocol

Take a look at our Expert Tips to ace DNA transfection in our blog section.

If you have any questions regarding jetPRIME®, please visit our dedicated Frequently asked questions or contact us. 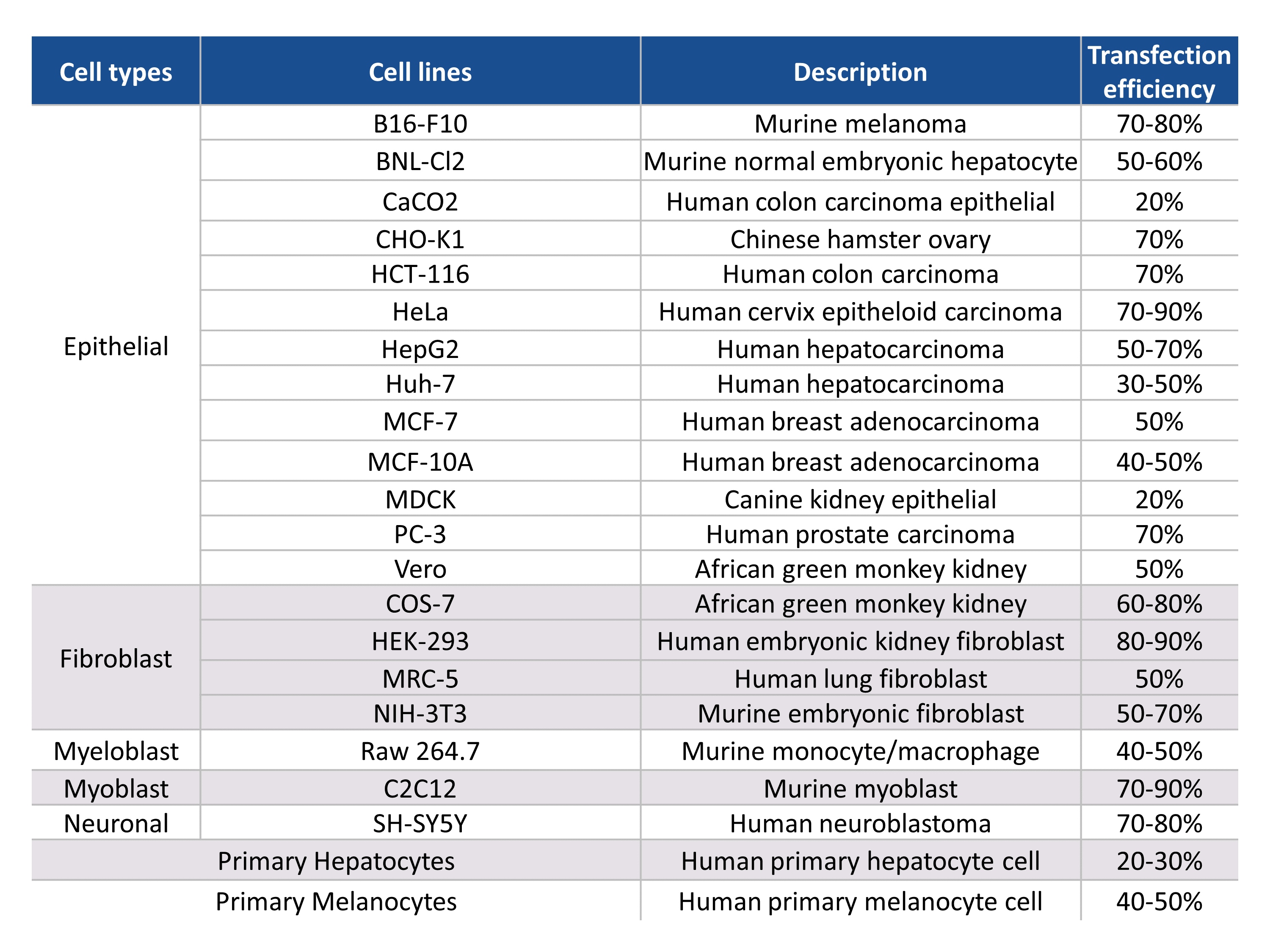 Plasmids are small circular DNA molecules that are commonly found in bacteria. Plasmids exist and replicate separately from chromosomal DNA and in bacteria they often carry genes that are beneficial for bacterial survival. Plasmids can be deliberately introduced into desired cells and utilized to overexpress a gene of interest in a specific cell line. This procedure is called DNA transfection and is a commonly used method for studying gene function or protein of interest.

The use of the CRISPR/Cas9 system in mammalian cells has recently emerged as a very convenient way to modify the cell genome at a specific locus. It involves transient transfection into mammalian cells of either (a) one or several plasmids coding for Cas9, the specific gRNA and eventually the sequence to be inserted, or (b) a mix of one or two plasmids and an RNA molecule (the gRNA).

We performed DNA and siRNA delivery with jetPRIME® and observed highly efficient gene silencing in a variety of cell lines with very low toxicity. Over 90% silencing is achieved in adherent cells, using 10 nM siRNA (Fig. 2). 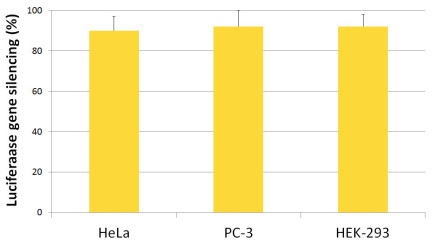 Every batch of jetPRIME® reagent is tested in-house by DNA transfection of HeLa cells with a GFP-expressing plasmid and each vial of reagent is provided with Certificate of Analysis.

jetPRIME gave better transfection efficiencies than other reagents tested and much less cell death was noticed.  The cells don't seem to mind being treated with the transfection reagent, there is no need to change the media anyway.  I've already ordered a bigger volume of jetPRIME and have used half of it already! Will possibly be ordering some more soon!
Kimberley S.
Royal Veterinary College, UK
I already ordered jetPRIME. It was very efficient and easy to use! Also the cells were in a good state after transfection. Good product!
Cosima R.
University Hospital Erlangen, DE
Very good transfection efficiency, better value and ease of use
Sean H.
MD Anderson Cancer Center, USA
jetPRIME has low toxicity and with less amount of DNA and the transfection reagent comparable expression can be achieved. I would prefer using jetPRIME over other reagents for the above mentioned reasons.
Vijayalakshmi A.
Baylor College of Medicine (BCM), USA
Switching to jetPrime significantly impacted the success of our studies. In comparison to a competitors transfection reagent, jetPrime gives higher transfection efficiency, less toxicity and requires less plasmid DNA.
Thank you PolyPlus for developing this reagent for researchers.
Marlene J.
Temple University, USA
We're still in love with the jetPRIME transfection reagent. It was really the only reagent that was satisfactory for our immortalized primary MEFs and allowed two projects in our lab to move forward much more quickly than our originally planned lentiviral strategy. Bravo!


Jeetayu B.
Albert Einstein College of Medicine, USA
I was so pleasantly surprised by the efficiency of jetPRIME reagent I ordered some the next day. MCF7 cells are notoriously hard to transfect and they are our primary cell line in the lab so I am so thankful to have this reagent at a reasonable cost.
Corinne H.
Ohio State University, USA
Many thanks for the jetPRIME sample I have received, I am more than happy and appreciate your outstanding service. I recommended the reagent to many researchers and students in the department they will order some very soon.
Esra A.
University of Sheffield, UK
I'm very satisfied with jetPRIME. Good co-transfection efficiency with very low toxicity. One of the best I have ever tried.
Diogo N.
CNRS Bordeaux, France 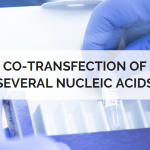 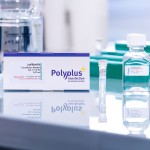 Use the CRISPR/Cas9 system with jetPRIME®
Read more