Take your gene expression to the next level by switching to mRNA!

mRNA transfection is as easy as DNA transfection, with the advantage that mRNA does not need to reach the cell nucleus for expression nor require cell division for efficient gene expression. Hence, cells that are slow dividing or that have developed specific mechanisms to protect their genome can finally be used for gene expression.

Unravel the full potential of your cells by switching to mRNA transfection.

1.5 ml is sufficient to perform ca.375 transfections in 6-well plates. Bulk quantities are available upon request. Please contact us. 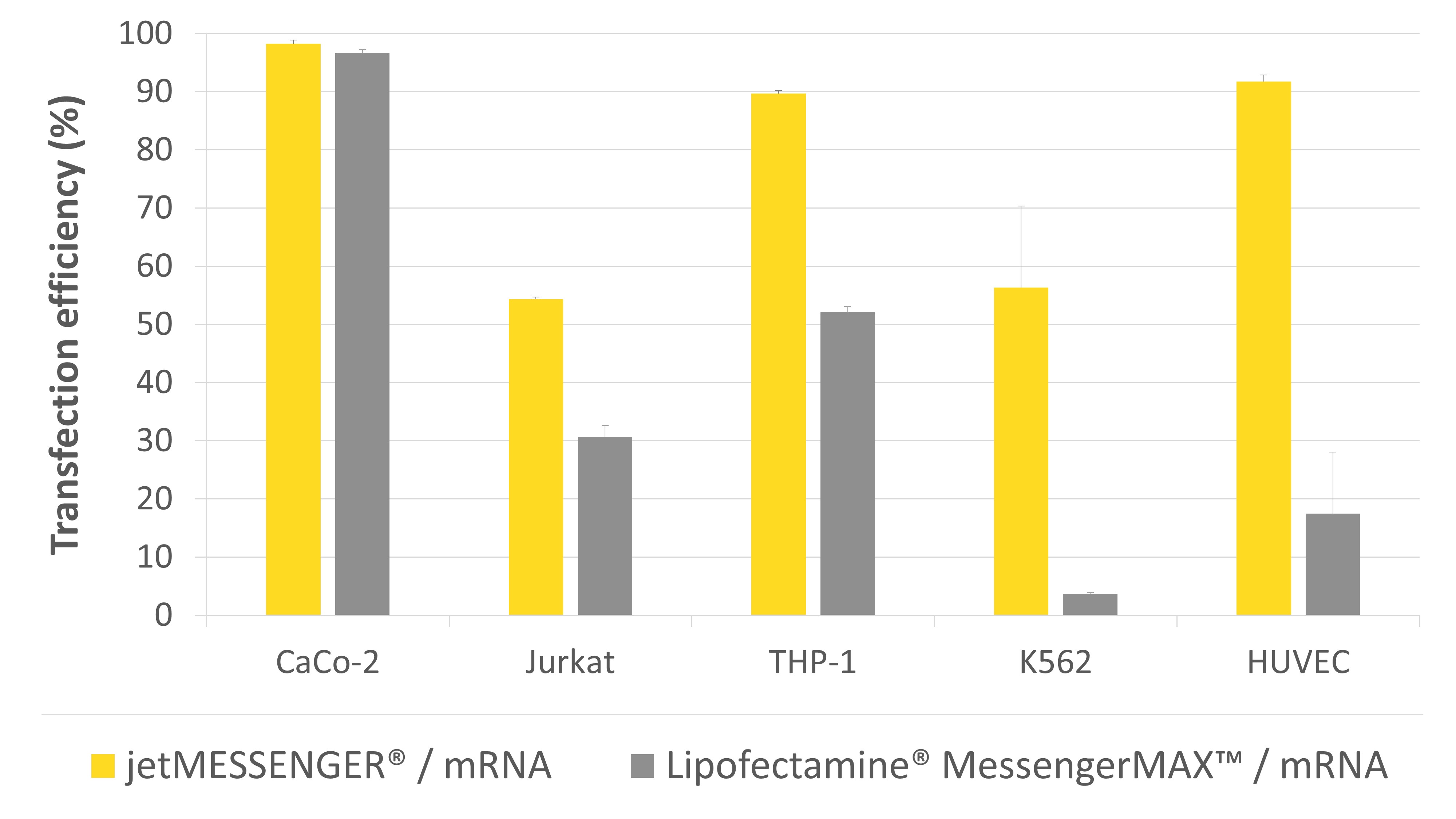 Works on a variety of cell lines

With jetMESSENGER®, achieve outstanding transfection efficiency in a wide variety of cell lines, from adherent and suspension cancer cells, to sensitive primary cells and neurons. jetMESSENGER® is also perfectly suitable for reprogramming experiments in fibroblasts and stem cells (Table 1).

mRNA transfection is as easy as DNA transfection: just dilute the mRNA in the provided buffer, add jetMESSENGER® to the diluted mRNA and add the mix to the cells’ growth medium in presence/absence of serum (compatible with antibiotics) (Fig. 3). 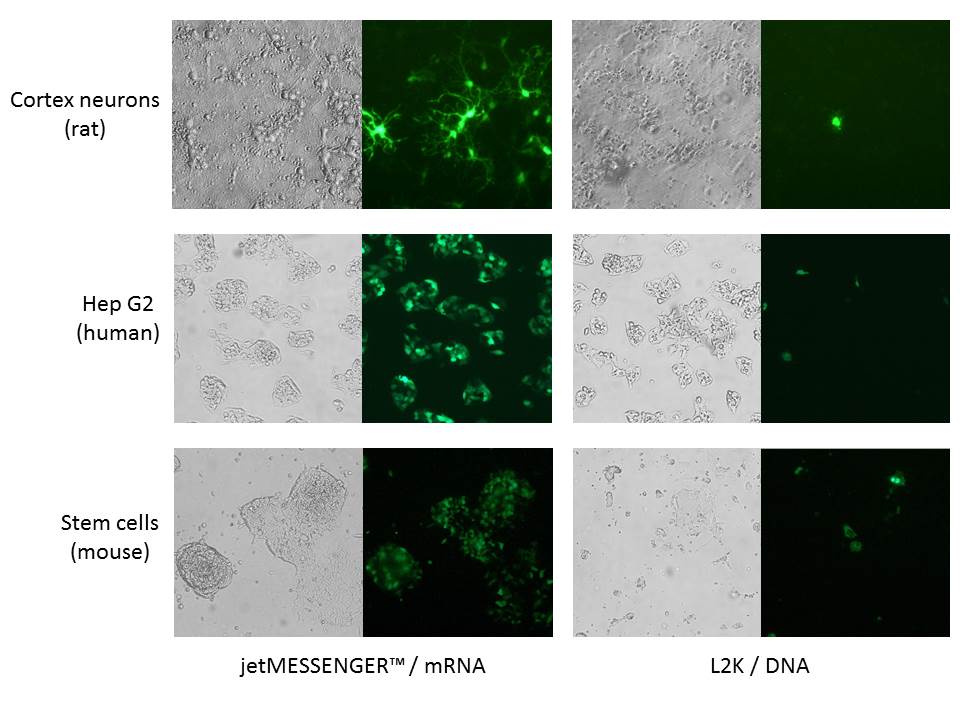 If you have any questions regarding jetMESSENGER®, please visit our dedicated Frequently asked questions or contact us at support@polyplus-transfection.com.

To learn more about mRNA synthesis, follow the link below: 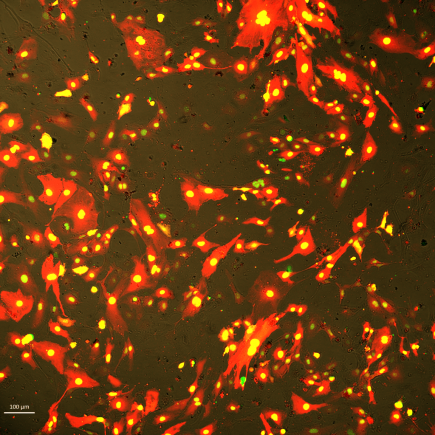 Fig. 4. jetMESSENGER® is suitable to transfect mRNA in BJ cells (human fibroblast). BJ cells were analyzed by bright-field and fluorescent microscopy 48 h after transfection. Transfection was performed with jetMESSENGER®/eGFP mRNA (5meC, pseudo-uridine, Trilink™) according to the manufacturer’s recommendations.

“We were very happy with the performance of jetMESSENGER and in vivo-jetRNA in delivering our antigen-expressing mRNA to a variety of cells in vitro and in vivo. The response achieved in relation to dose exceeded our expectations, without any observable adverse effect from the formulation.” – Remi C., Columbia University, New York, NY

“The protocol and handling of jetMESSENGER Kit was very simple and easy to use in comparison to other mRNA kits we tested. In our hands, jetMESSENGER is the only component that resulted in 60% transfection efficiency in peritoneal macrophages, in less than 9h while not affecting cell viability.”
Herb M., University of Cologne, Germany

“The jetMESSENGER kit makes mRNA transfections very easy. The one step protocol is easy to use and can be combined with media comprising serum. It is a great tool!”
Pollet J., Baylor College of Medicine (BCM), USA

“The experiments I did were really good, the transfection worked greatly and I did also a comparison with another transfection kit from a competitor, I have to say yours is much better.”
Stefano C., Baseclick GmbH, Germany

“I obtained a very good transfection efficiency using jetMESSENGER®. It is easy to use and the protocol is well described.”
Kathleen S., Pharmaceutical company, Germany

Here is a selection of relevant references using jetMESSENGER®, more are available in our Polyplus-transfection Database. 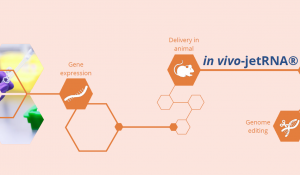 in vivo transfection reagents are the most powerful alternative to viral vectors for nucleic acid delivery. They are easy to… 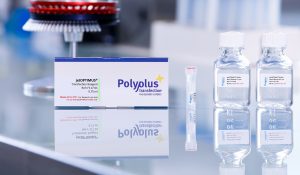 Ace your DNA transfection in the cell model you need! As Transfection Experts, we know that it is essential for… 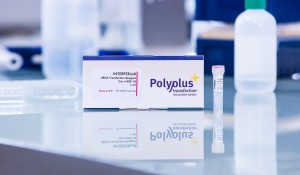 Genome editing
Delivery of gRNA and Cas9 for all systems

RNA interference
Transfection of siRNA, miRNA or other oligonucleotides

For cell lines and references, please search the Polyplus-transfection Database.