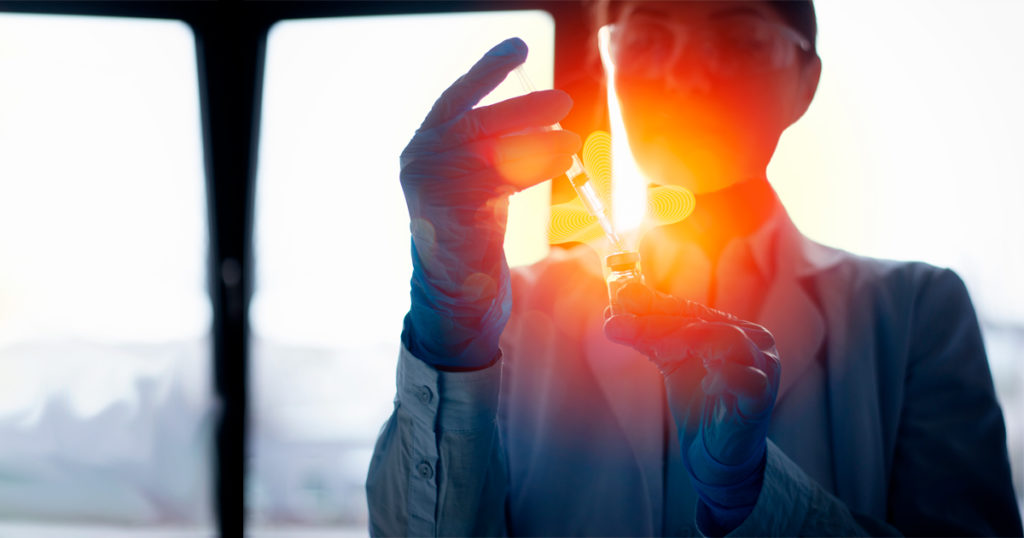 in vivo-jetRNA®+ is a lipid-based transfection reagent composed of preformed liposomes specifically developed to deliver mRNA in vivo. This reagent can be used to target unique or multiple organs, by using systemic injection routes, in various animal models (mice, rat, etc.). mRNA delivery using in vivo-jetRNA®+ is user-friendly, with a simple 2-step protocol and can be used for vaccination purposes, anti-cancer studies, genome editing using CRISPR/Cas9 method or protein replacement.

Webinar: Next generation lipid-based delivery for mRNA therapeutics: in vivo-jetRNA®+ 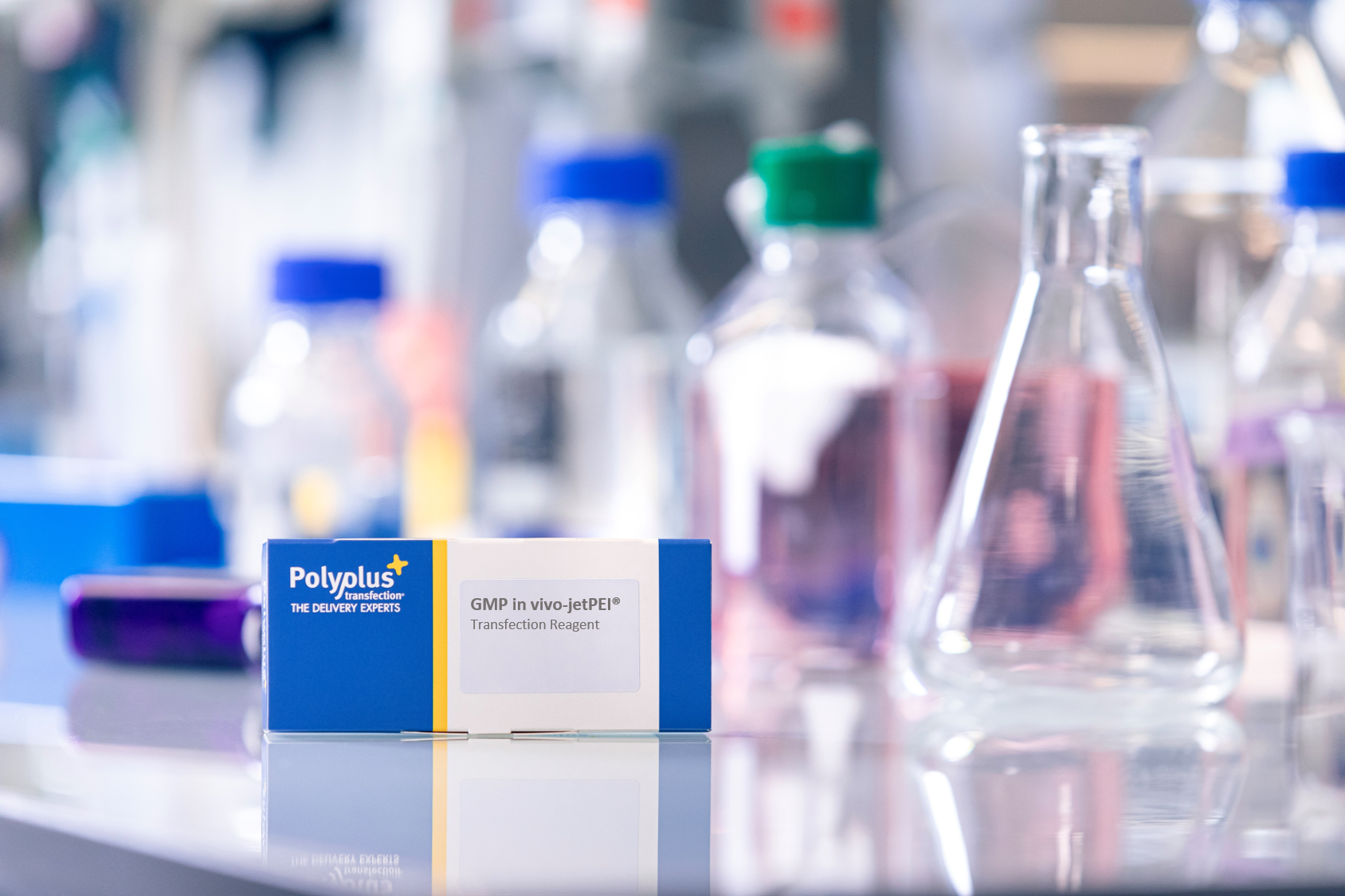 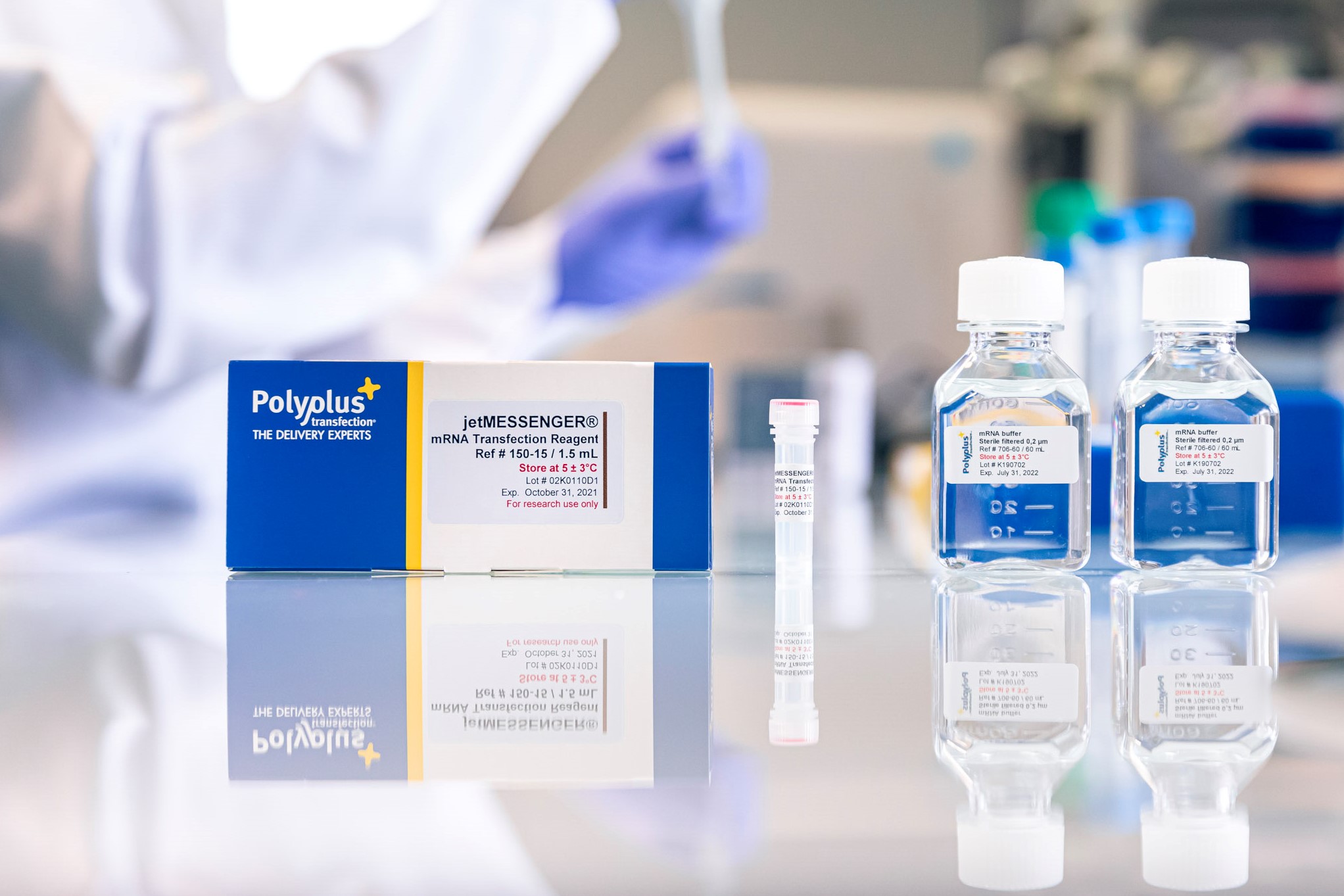 in vivo-jetRNA®+ is the reagent of choice to deliver mRNA to various organs. This is attributable to its intrinsic properties: in vivo-jetRNA®+ protects its payload against ubiquitous endonucleases, prevent non-specific interactions with proteins and promote efficient cell entry.

in vivo-jetRNA®+ shows an amazing capacity to encapsulate 100% of the mRNA available (Fig 1 A/) leading to an efficient gene expression that is comparable to lipid nanoparticles currently used as a gold standard for vaccination purpose (Fig 1 B/).

Ready-to-use: Liposome-based reagent that does not require any formulation equipment

Lipid nanoparticles (LNP) are a gold standard to deliver mRNA but it requires months of work, dedicated equipment and consumables to reach the optimal and efficient formulation. With in vivo-jetRNA®+, there is no need to spend time and budget to reach the perfect formulation. in vivo-jetRNA®+ has been carefully optimized by Polyplus and can be used with a simple and straightforward protocol without any formulation step.

in vivo-jetRNA®+/mRNA liposome solution is prepared in two steps and ready to be injected to the animal in 15 minutes: a gain of time with minimal effort (Fig. 2). Contrary to LNP, in vivo-jetRNA®+ is a ready to use formulation that do not require any formulation equipment.

This makes in vivo-jetRNA®+ the reagent of choice for vaccine or mRNA cancer therapy.

Choice of the administration route leads to different mRNA biodistribution. in vivo-jetRNA®+-mediated mRNA delivery leads to gene expression in numerous organs, through intraperitoneal injection, especially in the spleen and nodes that have a major role in the immune response but also in other organs such as lung, liver, pancreas and uterus (Fig. 4).

Being a non-viral delivery reagent, in vivo-jetRNA®+ can be safely administered in animals. By avoiding conventional vaccine approaches, it allows to generate a new class of vaccines that rely on direct gene transfer. This concept has several advantages – it is safer for the recipients, faster and cheaper to produce compared to viral vector vaccines or peptide loaded APC (Antigen Presenting Cells), and it has an immense potential to tackle many unmet medical needs.

Fig 4. in vivo-jetRNA®+ leads to efficient mRNA delivery in different organs depending on the administration route. mRNA encoding Luciferase was injected into mice using in vivo-jetRNA®+ through different administration routes A/ intraperitoneal (IP) and B/ intramuscular (IM). Liposomes were formed with a mRNA/in vivo-jetRNA®+ ratio of 1:2 (µgmRNA:µLreagent) in mRNA Buffer using either 20 µg mRNA for intraperitoneal (IP) injection or 5 µg mRNA for intramuscular (IM) injection. Luciferase expression was assessed 24 h post-injection.

in vivo-jetRNA®+ is the best choice in terms of safety. There are no secondary effects after injection, all animals remain healthy and no animal pain has been encountered. After administration of mRNA – in vivo-jetRNA®+ liposomes by any administration route, targeted organ remains phenotypically intact and no tissue damage is observed.

Fig. 5 in vivo-jetRNA®+ triggers no pro-inflammatory cytokine expression. mRNA liposomes were formed in 200 µL of mRNA Buffer using 10 or 20 µg of mRNA encoding Luciferase at a mRNA/in vivo-jetRNA®+ ratio of 1:2 (µgmRNA:µLreagent) and injected through intravenous injection (retro-orbital injection). 2 to 24 hours after injection, blood was collected and the level of IL-6, IL-12, GM-CSF, IFN-gamma and TNF-alpha was measured by ELISA (IL-6) or MACSPlex kits. As a positive control, LPS (200 µg) was administered into mice.

Immunization or vaccination is a process of introducing novel antigens to the immune system and enabling their recognition, leading to a specific immune response later on. Instead of presenting the whole inactivated pathogens or their partial forms as proteins/peptides to the immune system, mRNA coding for a relevant antigen complexed with in vivo-jetRNA®+ can be administered to the organism. This mRNA vaccine leads to generation of the appropriate antigen in the organism which elicit the subsequent immune response.

in vivo-jetRNA®+ is ideal to study gene function in vivo and provides the easiest method for the corroboration of in vitro study. in vivo-jetRNA®+ is especially suited for gene expression in cells that are usually difficult to transfect, such as slow diving cells or cells that have developed specific mechanisms to protect their genome.

The latest gene editing tool, CRISPR/Cas9 system, has proven to be an elegant solution for gene therapy. CRISPR/Cas9 in combination with in vivo-jetRNA®+ provides both precise delivery and effectiveness, giving rise to promising anti-cancer therapeutics, among other applications.

Each lot of in vivo-jetRNA®+ is tested in-house with a proprietary test following standard protocol. A sterility test is assessed for each lot. Every batch will be provided with Certificate of Analysis.

In order to download a product protocol or a certificate of analysis, please create an account on Polyplus® Portal.