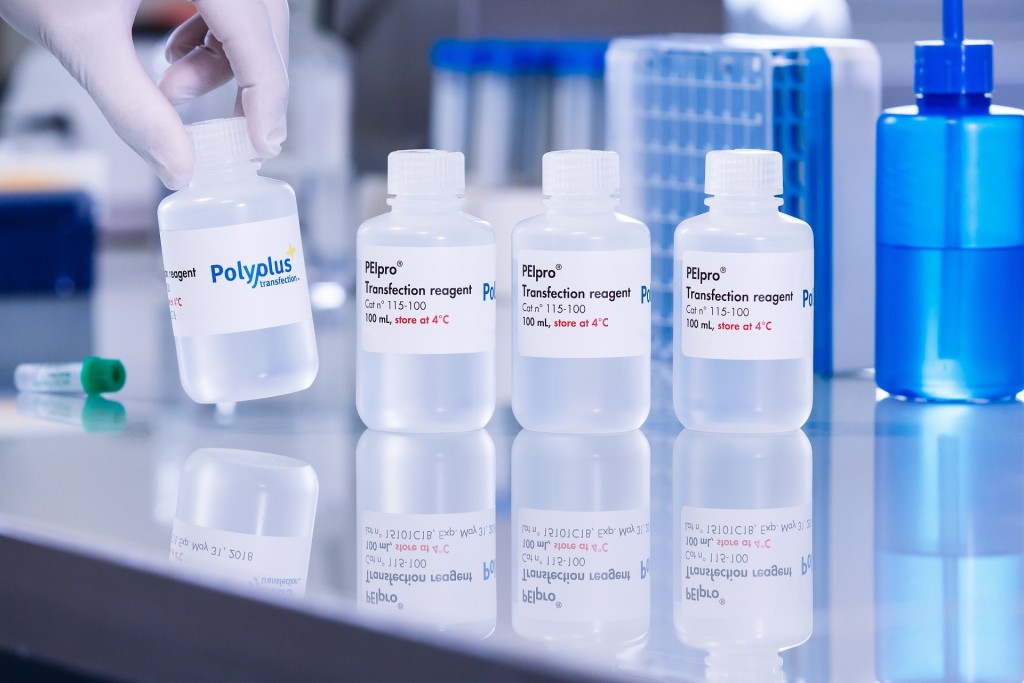 Polyplus-transfection launches the next generation PEI transfection reagent for bioproduction

“The PEIpro® launch significantly extends our line of quality transfection reagents for biotech and bio-pharmaceutical companies. It will substantiallyincrease Polyplus’ presence in the fast growing bio-production segment,” said Mark Bloomfield, CEO of Polyplus-transfection. “The PEIpro® transfection reagent is the only product currently on the market that has been tailored to meet current regulatory guidelines for raw materials used in bio-production. It has been possible to develop PEIpro® because of Polyplus’ proven reputation as an effective, responsive and reliable supply chain partner to many successful bio-pharma companies worldwide.”

Polyplus-transfection® has specifically developed, formulated and qualified the PEI based transfection reagent to meet the needs of scientists working on large-scale transient transfection. PEIpro® now adds to the Polyplus portfolio a unique, ready-to-use and cost effective alternative transfection reagent for customers using calcium phosphate or an expensive, unqualified lipid based commercial reagent.

The PEIpro® transfection reagent is an animal free product supporting its use in clinical and therapeutic product development and production. As PEIpro® is fully optimized for the production of recombinant proteins by Transient Gene Expression (TGE) in a wide range of production platforms such as suspension adapted mammalian cell lines cultivated in shaker flasks, platform shakers or stirred tank bioreactors, it is immediately usable in laboratories and facilities with these platforms. PEIpro® can also be used for viral vector production (lentiviruses, adenoviruses, AAV, etc.) using adherent cell lines cultivated in serum-free culture media. On request, Polyplus-transfection can supply a fully GMP compliant version of PEIpro™ transfection reagent for the production of therapeutic proteins and viral vectors.

The PEIpro® transfection reagent offers scientists working in pharmaceuticals and biotechnology specific advantages over the current PEI offerings in the marketplace for bioproduction. The reagent is ready-to-use, well characterized in terms of chemical structure and is manufactured and formulated using a highly specific and controlled production process in a dedicated manufacturing facility.

PEIpro® is released for shipment only after conforming to advanced quality controls. These include a specific transfection efficiency test and specification that ensures excellent lot-to-lot consistency allowing customers to spend time optimizing production yields instead of formulating, characterizing and qualifying their ‘home brew’ transfection reagent. In addition, the purchase of PEIpro® provides the freedom to operate via an implied license for the use of polyethylenimine (PEI) in transfection for R&D and commercial applications, IP for which Polyplus-transfection is the exclusive, worldwide licensee.