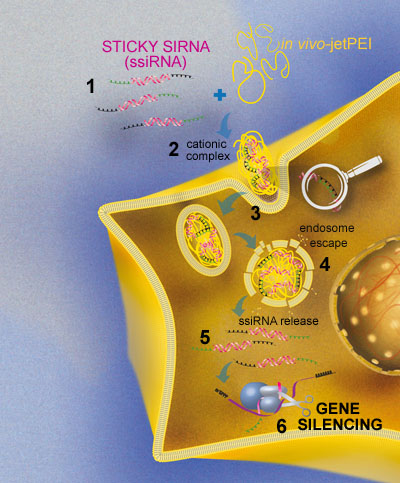 Strasbourg, April 24th, 2008 – Polyplus-transfection® SA, a company specialized in research, development and commercialization of innovative reagents for delivery of biomolecules, today announces the development of a new technology that improves in vivo delivery of small interfering RNAs (siRNAs) when they are associated with a cationic polymer. This technology is based on a new class of small interfering RNAs the company has developed: « STICKY SIRNA » (ssiRNAs™).

The technology involves extending the opposite ends of interfering RNAs with short complementary A(5-8)/T(5-8) 3′ sequences that are able to form concatemers in the presence of a cationic polymer such as in vivo-jetPEI® (also developed by Polyplus-transfection) and thus form complexes as stable as with genes. With this new technology, small interfering RNAs stay connected to their delivery reagent during the whole journey to the target cells, and induce the RNA interference mechanism. This innovation is applicable to therapeutic siRNAs, and a wide variety of pathologies could benefit from it such as cancers, allergies and viral diseases.

Up to now, the market for the delivery of therapeutic siRNAs has been dominated by the use of cationic lipids. Thanks to this ssiRNA™technology, cationic polymers such as in vivo-jetPEI® have now entered the market with clear advantages in specific areas.

« We are proud of having developed this new technology, for which we have filed a broad patent application as well as a trademark application, » said the C.E.O. of Polyplus-transfection, » Joëlle Bloch. « Within a few months, we have succeeded in offering our customers two major therapeutic advances: a GMP-compliant delivery reagent, in vivo-jetPEI®, and a new means of delivering siRNAs associated with this reagent. Our customers have already shown a keen interest in these two developments, and ssiRNAs™ are starting to be tested in vivo by several academic laboratories and biotechnology companies. »

Polyplus-transfection’s new technology was outlined in an article published in Proceedings of the National Academy of Sciences of the United States of America in October 2007 under the title « Sticky overhangs enhance siRNA-mediated gene silencing », volume 104, pages 16,050-16,055, Bolcato-Bellemin et al.

RNA interference is a natural mechanism that operates in cells and makes it possible to selectively silencing or regulating specific gene expression. The mechanism of RNA interference is a major discovery in biology, whose potential therapeutic impact was recognized by the award of the Nobel Prize for Medicine in 2006. As many diseases are the result of the inappropriate activity of some genes, the ability to control these genes selectively through RNA interference has speeded up the understanding of the roles of these genes and their interrelations.

Since then, it has been shown that RNA interference could be a means of treating a large number of diseases. In effect, RNA interference can be induced by small, double-stranded RNA molecules called small interfering RNAs (siRNAs). Delivering these chemically synthesized molecules into cells is one of the means of activating RNA interference for therapeutic purposes, by targeting the messenger RNA of a gene to be knocked down. This process has the effect of stopping the production of a protein encoded by the target gene.