Nucleic acids have considerable potential as therapeutic agents in the treatment of pathologies including genetic diseases, viral infections, and cancer therapies. The major challenge for the use of nucleic acids in therapy lies in safely delivering these anionic macromolecules to their intended sites of action. The increasing use of viral vectors in Human Gene Therapy clinical trials has emphasized the potential of nucleic acid-based approaches to address the unmet needs of drug-based treatments. While viral vector-based Gene Therapy is on everyone’s mind with recently approved Luxturna™, as well as other viral vector-based treatments under Fast Track Designation, it is key to remember that non-viral vectors present considerable advantages in terms of reliability, safety and costs for nucleic-acid based therapies. At Polyplus-transfection®, we develop powerful non-viral vectors to safely deliver nucleic acids in vivo to target a wide range of tissues, through various routes of administrations. Of these reagents, in vivo-jetPEI® and its highest quality grade cGMP in vivo-jetPEI® are acknowledged as a non-viral vector of choice to deliver nucleic acids respectively in animal preclinical studies and in Human clinical trials, notably for cancer and immunotherapy.

The Outsider to Watch Out For in Gene Therapy

Over the past three decades, research has been focused on addressing the unmet needs of drug-based treatments by developing gene-based therapy. Based on genome modification through intracellular delivery of engineered exogenous nucleic acids, gene-based therapy is extensively investigated for its use as a stand-alone treatment or in combination with existing drug treatments. Gene-based therapies are generally divided into two categories: viral and non-viral vector mediated therapies. Both of these methods consist in engineering safe and efficient nanocarriers that contain the desired exogenous nucleic acid to be administered systemically or locally into a patient. Viral and non-viral methods differ by their properties: 1) a viral vector approach is based on the use of modified viruses, essentially retroviruses, lentiviruses, adenoviruses and adeno-associated viruses (AAV), to carry into their own viral genome the desired nucleic acid sequence. 2) a non-viral vector is based on the engineering of nanocarriers (lipids, polymers) that uses similar cell entry mechanisms as viruses.

When should one preferentially choose a viral or a non-viral delivery method to increase the success rate of a nucleic acid-based therapy?  Taking into account the substantial technical progress in safety for viral delivery and efficiency for non-viral delivery, as well as methods used in ongoing gene therapy pre-clinical and clinical trials, there is an emerging tendency for a dedicated scope of use for each method.

Viral vectors have a clear advantage compared to non-viral approaches in treating genetic defects: infectivity efficiency. Viral vectors are generally chosen for their ability to infect both dividing and quiescent cells, required to restore functionality of a defective gene in all cells of the targeted tissue. This main advantage is counterbalanced by immunogenicity and manufacturing bottlenecks (Hidai & Kitano et al., 2018). To decrease immunogenicity, modified viral vectors with minimal viral genome are preferred. Notably, AAVs which have been shown to be less immunogenic than other viruses. However, AAVs still face the same limit as other viral vectors: repeated administration is rendered difficult as the patient may develop a pre-existing immunity leading to a reduced clinical efficiency (Hardee et al., 2016). To address the manufacturing bottleneck in virus production, it has become crucial to improve virus production yield as well as facilitate the transition to large-scale manufacturing. We have previously addressed these scaling-up limitations in Cell Gene Therapy Insights 2018: Addressing scaling-up limitations: Optimized PEI-mediated production of clinical grade viral vectors.

With viral vectors dominating Cell and Gene therapy, when should one turn to a non-viral delivery method? Which methods can be used, and how does one choose a method while keeping the end-game in mind: commercialization of an efficient and affordable drug? As pioneers and experts in chemical-based delivery reagents, we aim to provide the reader with an overview of the current state of non-viral methods as well as present our PEI-based injectable method in vivo-jetPEI® and its range of higher quality grade reagents (preclinical grade in vivo-jetPEI® and cGMP in vivo-jetPEI®).

Non-viral vectors side step the main concerns that come with using viruses: safety, immunogenicity and manufacturing limits (yield, scaling-up and costs). Several non-viral methods have been developed and are worth mentioning: naked nucleic acid, physical-mediated methods (gene gun, electroporation, hydrodynamic) and chemical-based nanoparticles. While these techniques are all used in gene delivery studies performed in small animal models (eg. mouse), most of them are generally less applicable for systemic gene delivery in Humans, except for naked nucleic acid and chemical-based nanoparticles (Yin et al., 2014).  Naked nucleic acid delivery without any carrier is by far the simplest approach for gene delivery. The range of action of naked nucleic acid is often limited due to low dissemination and low cellular internalization, attributed respectively to a lack of protection from endonuclease degradation and its uncondensed shape and polyanionic charge. Typically, the order of magnitude of the half-life of plasmid DNA is estimated to 10 minutes following systemic injection in mice (Kawabata et al., 1994). To overcome these challenges, chemical-based nanoparticles have been developed to interact with nucleic acids in order to protect them from degradation and condense them into nanosized complexes that can be more easily internalized by cells.

There are two main types of nanoparticles that are under clinical evaluation: lipid and cationic polymer-based. Lipid-based nanoparticles (LNPs) are synthesized taking into account the size, chemical properties of lipids and identification of conjugates to increase delivery specificity to a cell type. While LNPs are the most clinically advanced non-viral delivery system (eg. ALN-TTR02 in Phase III; Adams et al., 2018), they require custom formulation during the research development phase, as well as custom manufacturing for scale-up and GMP-grade compliance. Furthermore, the use of LNPs in registered clinical trials is mainly restricted to siRNA delivery (Yin et al., 2014, Chen et al., 2016).  Conversely, synthetic cationic polymers, and especially polyethyleimine (PEI) bring flexibility with the delivery of different nucleic acids and compatibility with the use of both systemic and local injection routes.

We developed the leading PEI-based in vivo delivery method – in vivo-jetPEI® – with the following objectives: easiness of use, efficiency and versatility. It is a cationic polymer composed of polyethyleneimine (PEI) that efficiently encapsulates and protects negatively charged nucleic acids by forming nanopolyplexes with an overall net cationic charge. These positively charged complexes enhance interaction with negatively charged extracellular membrane and favor intracellular uptake. It is without doubt that PEI is known to be very efficient for endosomal escape due to the presence of amines (I, II, III) which induces the “proton sponge” mechanism:  PEI acts as a buffer against endosomal acidification and leads to rupture of endosomes (Boussif et al., 1995). As pointed out by Rouanet et al., 2017 in an elegant review on the current state of gene therapy approaches for pancreatic cancer, PEI is acknowledged as being a non-viral method of choice to facilitate cellular and nuclear delivery of plasmid DNA by effectively preventing its degradation by the lysosomal pathway.

Compared to other chemical-based delivery methods (LNPs or cationic polymers), in vivo-jetPEI® is a ready-made commercially available solution that is simply mixed with the nucleic acid of interest to form less than 100 nm nanoparticles. In addition to being reliable by ensuring reproducible delivery efficiencies, in vivo-jetPEI® opens a panel of possibilities with its ability to deliver any type of nucleic acid (DNA, mRNA, siRNA, miRNA, etc.) and its compatibility with all frequently used injection routes (intravenous, intramuscular, subcutaneous, intraperitoneally), as well as many others including intracerebral, intratumoral, topical application and nasal instillation. This versatility is essential when the aim is to target organs other than the liver, which is usually where accumulation is observed with LNPs.

Fig 1. in vivo-jetPEI® is a safe method of delivery, with no major inflammatory response triggered upon injection. Complexes were formed in 200 µl of 5% glucose using 40 µg of luciferase siRNA with in vivo-jetPEI® at an N/P ratio of 8, and injected through retro-orbital sinus. 1 to 6 hours after injection, blood was collected and the level of TNF, IFN and IL-6 was measured by ELISA (n=8). As a positive control, LPS was injected intraperitoneally.

Although non-viral vectors represent a small percentage of ongoing Human gene therapy clinical trials, PEI-based non-viral delivery is increasingly used in treatments of pathologies such as cancer (eg. bladder, ovarian, pancreatic, small-cell lung cancer), and in immunotherapy (eg. Dengue, HIV, CMV, Hepatitis). in vivo-jetPEI® has become a method of choice for in vivo delivery in animal models and in Human due to the fact that it was developed to avoid toxicity that was in the past associated with the use of PEI. We could show in mouse model that following systemic injection, in vivo-jetPEI® did not induce detectable inflammatory response (Figure 1) nor hepatotoxicity (Figure 2) (Bonnet et al., 2008). Before starting Human clinical studies, the safety of in vivo-jetPEI®/nucleic acid-based therapy is assessed during preclinical studies, usually performed in larger animal models such as non-human primates to evaluate the biodistribution, safety and pharmacokinetics; these data are often not published. In addition, during the Phase I clinical study, similar safety studies are performed on Human participants, such as in Buscail et al., 2015 where they could show that local and repeated intratumoral delivery of DNA complexed with in vivo-jetPEI® was safe and well tolerated in patients with pancreatic cancer.

Fig 2. in vivo-jetPEI® is a safe method of delivery, with no major inflammatory response triggered nor detectable hepatotoxicity. Complexes were formed in 200 µl of 5% glucose using 40 µg of luciferase expressing plasmid with in vivo-jetPEI® at an N/P ratio of 8, and injected through retro-orbital sinus. 24 hours after injection, blood was collected and the level of LDH, ASAT, ALAT and ALP was measured. Each value corresponds to the mean ± SD (n=8). As a positive control, CCl4 was subcutaneously administered.

In cancer treatment, it was shown to be efficient in selectively delivering suicide genes to actively dividing cancer cells, and in regulating gene expression of tumor suppressor gene and oncogenes: a perfect example of turning a weakness into a strength. Anchiano Therapeutics has been working on such an approach to treat Human bladder cancer using PEI-based non-viral delivery of a recombinant plasmid DNA construct BC-819 that encodes for lethal diphteria toxin specifically in activated H19 overexpressing cancer cells (Sidi et al., 2008, Gofrit et al., 2014). In addition to the latter, in vivo-jetPEI® is the non-viral delivery vector of choice in registered clinical trials for cancer therapy (Buscail al., 2015; Tormo et al., 2009) and HIV immunotherapy (Lisziewicz et al., 2004) (Table 1). Promisingly, at the early development phase, there is an increase in the number of studies in which PEI-based delivery is chosen as the nucleic acid-based therapy in cancer, immunotherapy studies, as well as in treatment of medical conditions such as brain injury (Campbell et al., 2012) or sepsis (He et al.,2016).

As transfection experts, we are convinced that there is sufficient space for both viral and non-viral vectors to cover the unaddressed needs of drug-based treatments with Gene Therapy. This is why we are continuously at the forefront with the development of transfection reagents to overcome inherent limitations of viral vector and non-viral vector systems. To conclude, we would like to recommend investigators to carefully take into account advantages and disadvantages of each method, and to keep in mind that viral vectors unleash their full potential for treatment of rare diseases, while non-viral delivery vectors are optimal for treatment of common diseases such as cancer, infectious diseases, and other chronic diseases. 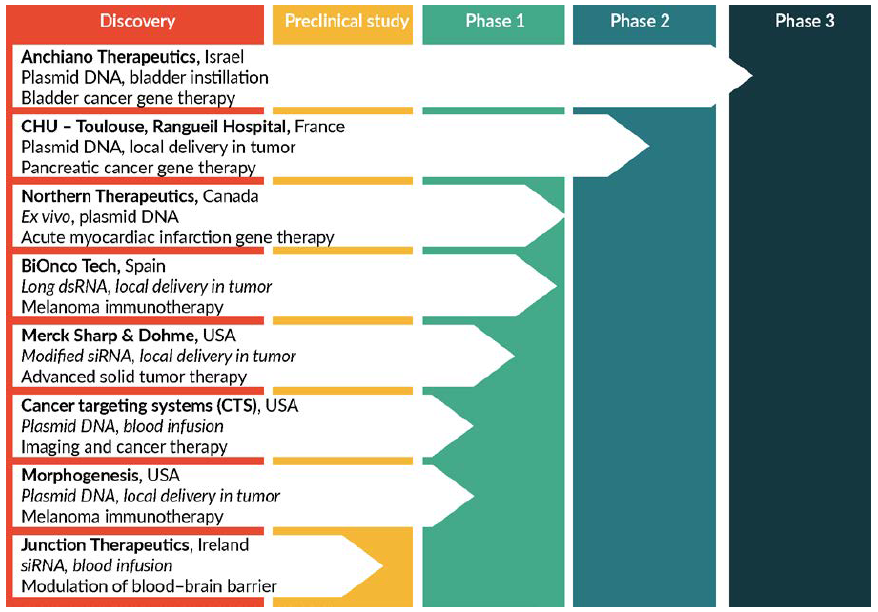