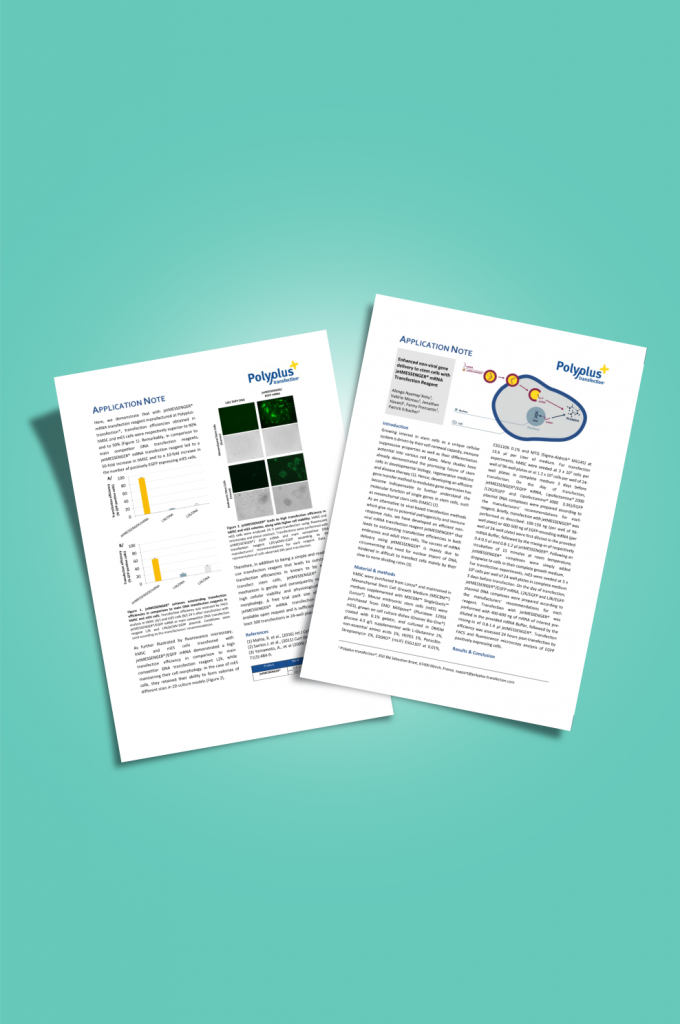 Growing interest in stem cells as a unique cellular system is driven by their self-renewal capacity, immune suppressive properties as well as their differentiation potential into various cell types. Many studies have already demonstrated the promising future of stem cells in developmental biology, regenerative medicine and disease therapy (1). Hence, developing an efficient gene transfer method to modulate gene expression has become indispensable to further understand the molecular function of single genes in stem cells, such as mesenchymal stem cells (hMSC) (2).

As an alternative to viral-based transfection methods which give rise to potential pathogenicity and immune response risks, we have developed an efficient non-viral mRNA transfection reagent jetMESSENGER® that leads to outstanding transfection efficiencies in both embryonic and adult stem cells. The success of mRNA delivery using jetMESSENGER® is mainly due to circumventing the need for nuclear import of DNA, hindered in difficult to transfect cells mainly by their slow to none dividing rates (3).

hMSC were purchased from Lonza® and maintained in Mesenchymal Stem Cell Growth Medium (MSCBM™) medium supplemented with MSCGM™ SingleQuots™ (Lonza®). Mouse embryonic stem cells (mES) were purchased from EMD Millipore® (Pluristem 129S6 mES), grown on cell culture dishes (Greiner Bio-One®) coated with 0.1% gelatin, and cultured in DMEM glucose 4.5 g/L supplemented with L-Glutamine 1%, non-essential amino acids 1%, HEPES 1%, Penicillin-Streptomycin 1%, ESGRO® (mLIF) ESG1107 at 0.01%, ESG1106 0.1% and MTG (Sigma-Aldrich® M6145) at 13.6 µl per Liter of medium. For transfection experiments, hMSC were seeded at 3 x 103 cells per well of 96-well plates or at 1.2 x 104 cells per well of 24-well plates in complete medium 3 days before transfection. On the day of transfection, jetMESSENGER®/EGFP mRNA, Lipofectamine® 2000 (L2K)/EGFP and Lipofectamine® 3000 (L3K)/EGFP plasmid DNA complexes were prepared according to the manufacturers’ recommendations for each reagent. Briefly, transfection with jetMESSENGER® was performed as described: 100-150 ng (per well of 96-well plate) or 400-500 ng of EGFP-encoding mRNA (per well of 24-well plate) were first diluted in the provided mRNA Buffer, followed by the mixing-in of respectively 0.4-0.5 µl and 0.8-1.2 µl jetMESSENGER®. Following an incubation of 15 minutes at room temperature, jetMESSENGER® complexes were simply added dropwise to cells in their complete growth medium.

For transfection experiments, mES were seeded at 5 x 104 cells per well of 24-well plates in complete medium 3 days before transfection. On the day of transfection, jetMESSENGER®/EGFP mRNA, L2K/EGFP and L3K/EGFP plasmid DNA complexes were prepared according to the manufacturers’ recommendations for each reagent. Transfection with jetMESSENGER® was performed with 400-600 ng of mRNA of interest pre-diluted in the provided mRNA Buffer, followed by the mixing-in of 0.8-1.4 µl jetMESSENGER®. Transfection efficiency was assessed 24 hours post-transfection by FACS and fluorescence microscopy analysis of EGFP positively expressing cells. 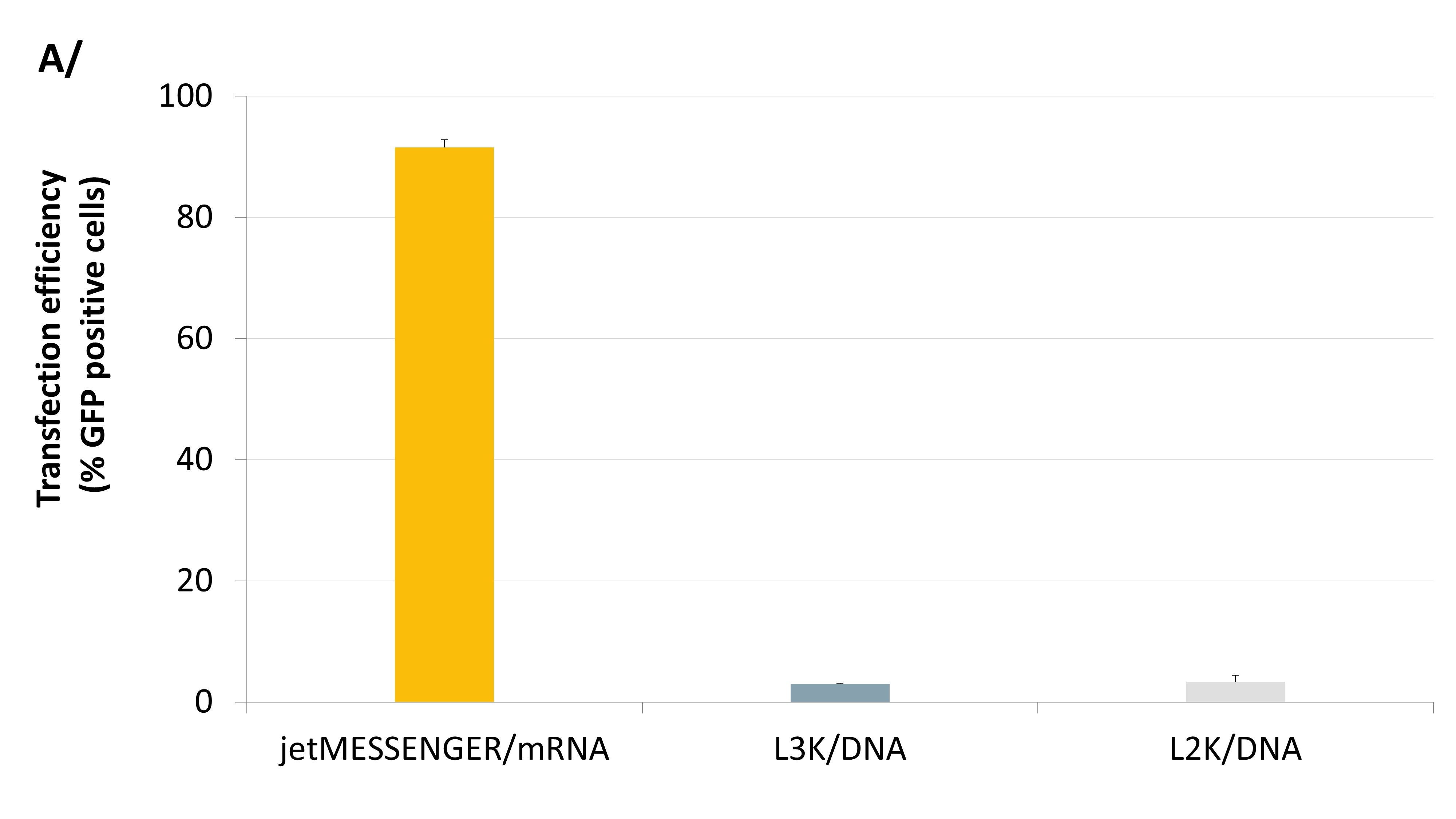 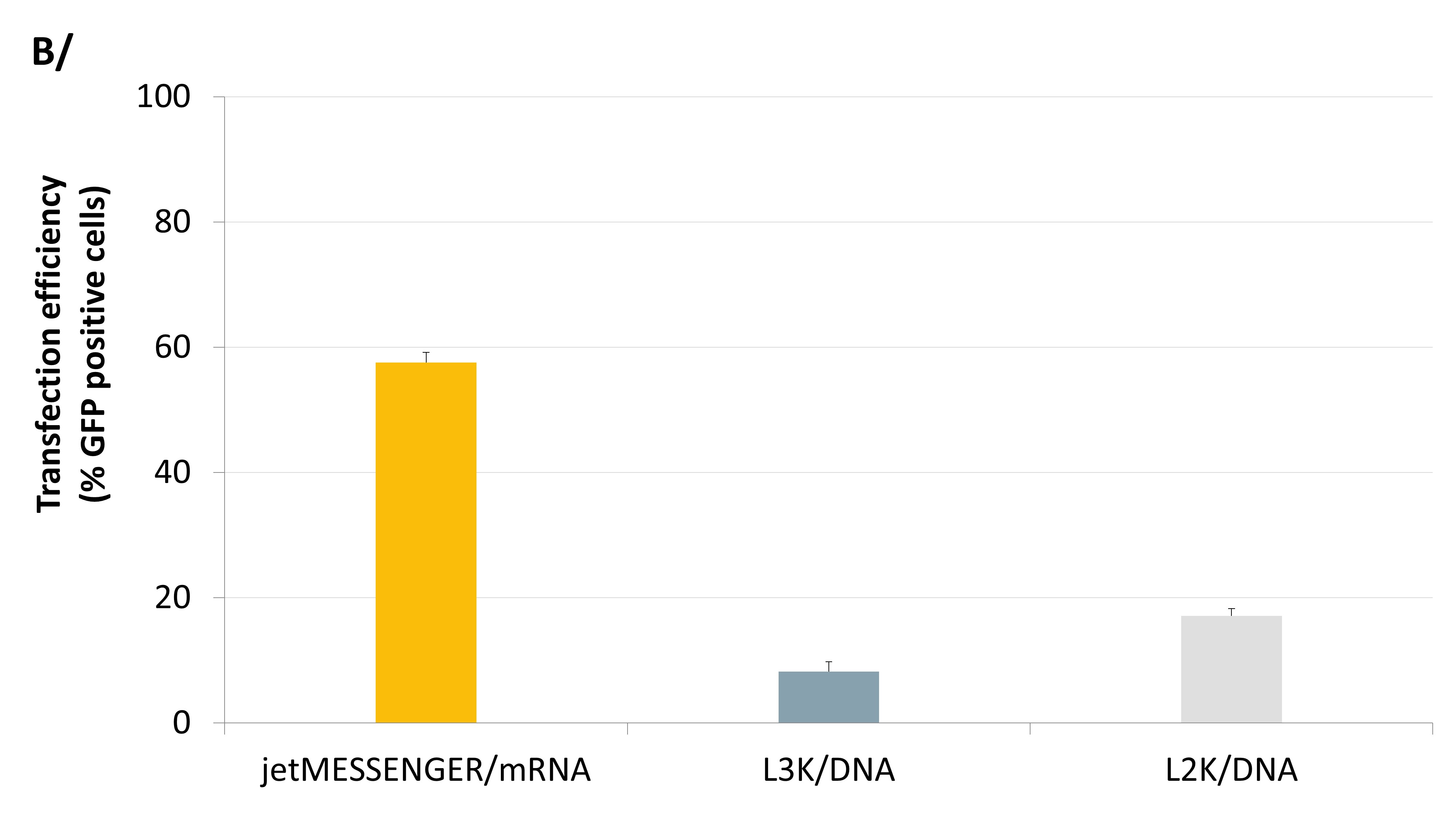 As further illustrated by fluorescence microscopy, hMSC and mES cells transfected with jetMESSENGER®/EGFP mRNA demonstrated a high transfection efficiency in comparison to main competitor DNA transfection reagent L2K, while maintaining their cell morphology. In the case of mES cells, they retained their ability to form colonies of different sizes in 2D culture models (Figure 2). 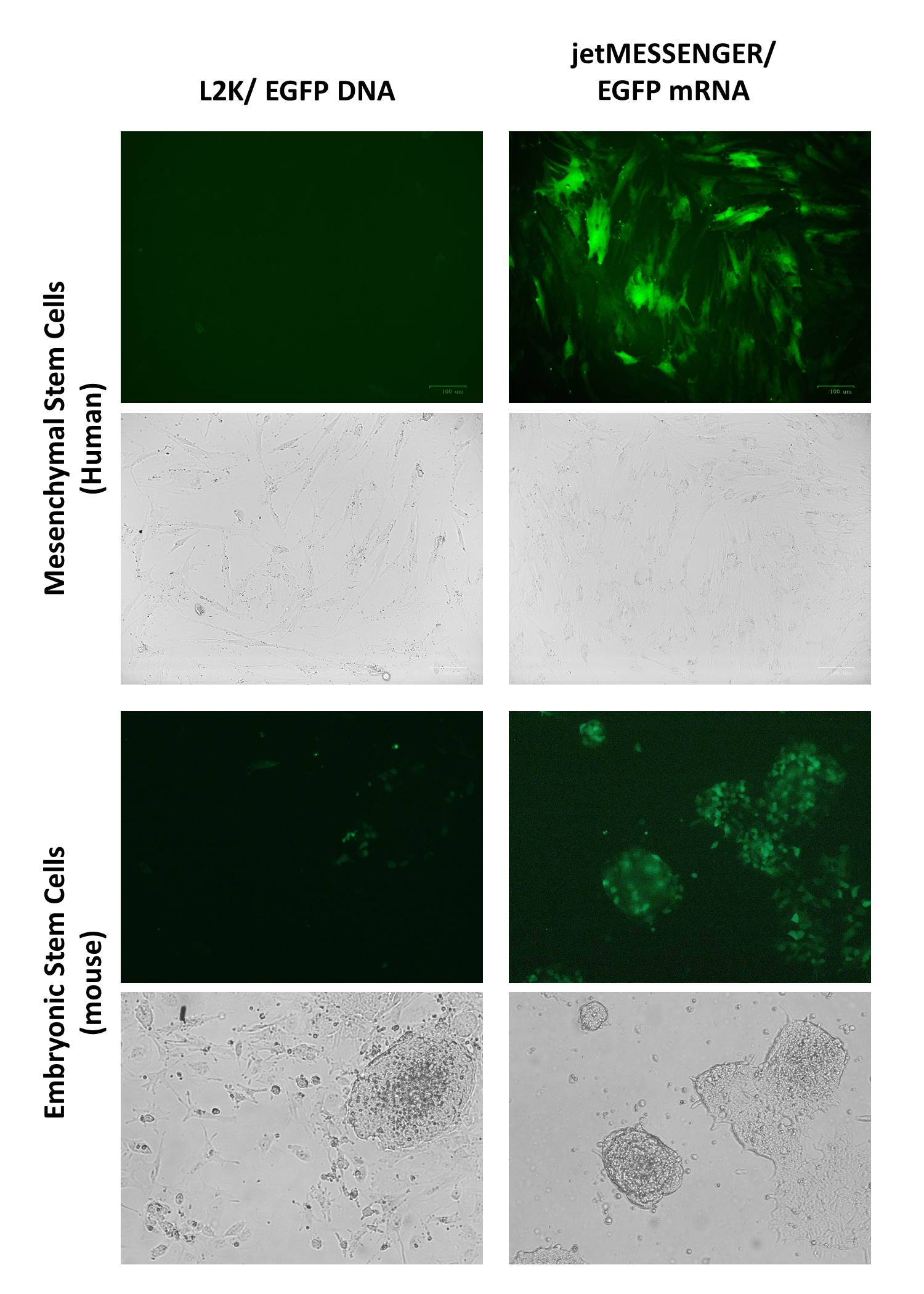 Therefore, in addition to being a simple and ready-to-use transfection reagent that leads to outstanding transfection efficiencies in known to be hard-to-transfect stem cells, jetMESSENGER® delivery mechanism is gentle and consequently maintains a high cellular viability and physiologically relevant morphology. A free trial pack size of 0.1 ml of jetMESSENGER® mRNA transfection reagent is available upon request and is sufficient to perform at least 100 transfections in 24-well plates.