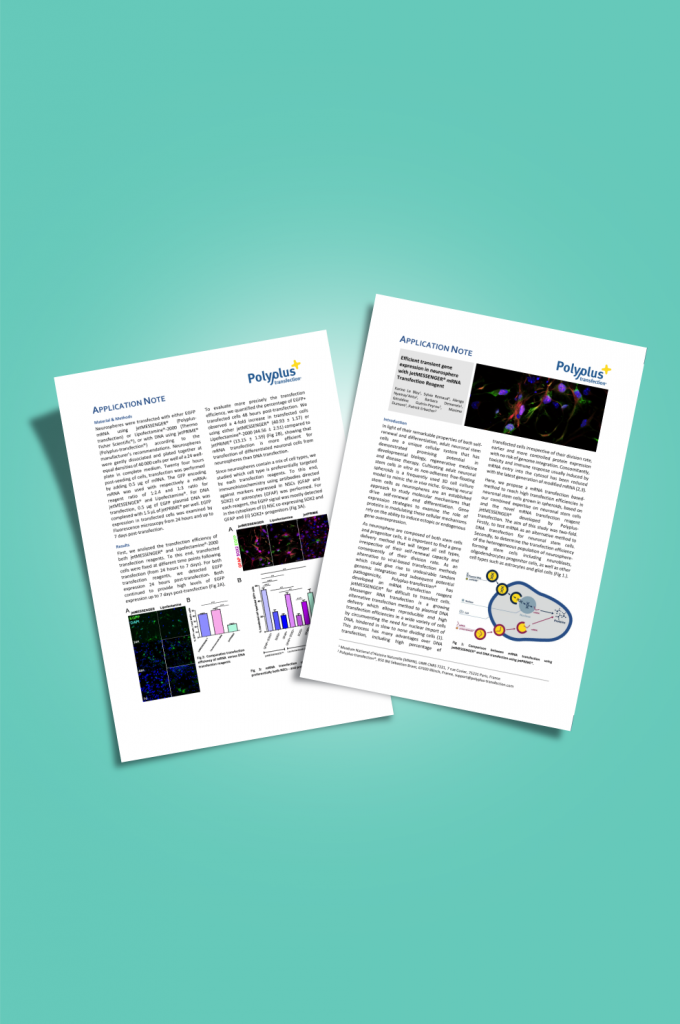 In light of their remarkable properties of both self-renewal and differentiation, adult neuronal stem cells are a unique cellular system that has demonstrated promising potential in developmental biology, regenerative medicine and disease therapy. Cultivating adult neuronal stem cells in vitro as non-adherent free-floating spheroids is a frequently used 3D cell culture model to mimic the in vivo niche. Growing neural stem cells as neurospheres are an established approach to study molecular mechanisms that drive self-renewal and differentiation. Gene expression strategies to examine the role of proteins in modulating these cellular mechanisms rely on the ability to induce ectopic or endogenous gene overexpression.

As neurosphere are composed of both stem cells and progenitor cells, it is important to find a gene delivery method that will target all cell types, irrespective of their self-renewal capacity and consequently of their division rate. As an alternative to viral-based transfection methods which could give rise to undesirable random genomic integration and subsequent potential pathogenicity, Polyplus-transfection® has developed an mRNA transfection reagent jetMESSENGER® for difficult to transfect cells. Messenger RNA transfection is a growing alternative transfection method to plasmid DNA delivery which allows reproducible and high transfection efficiencies in a wide variety of cells by circumventing the need for nuclear import of DNA, hindered in slow to none dividing cells (1). This process has many advantages over DNA transfection, including high percentage of transfected cells irrespective of their division rate, earlier and more controlled protein expression with no risk of genome integration. Concomitantly, toxicity and immune response usually induced by mRNA entry into the cytosol has been reduced with the latest generation of modified mRNA (2,3). 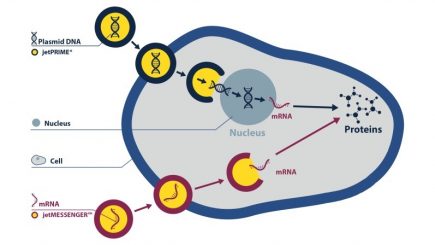 Neurospheres were transfected with either EGFP mRNA using jetMESSENGER® (Polyplus-transfection) or Lipofectamine®-2000 (Thermo Fisher Scientific®), or with DNA using jetPRIME® (Polyplus-transfection®) according to the manufacturer’s recommendations. Neurospheres were gently dissociated and plated together at equal densities of 40 000 cells per well of a 24 well-plate in complete medium. Twenty four hours post-seeding of cells, transfection was performed by adding 0.5 µg of mRNA. The GFP encoding mRNA was used with respectively a mRNA: reagent ratio of 1:2.4 and 1:3 ratio for jetMESSENGER® and Lipofectamine®. For DNA transfection, 0.5 µg of EGFP plasmid DNA was complexed with 1.5 µL of jetPRIME® per well. EGFP expression in transfected cells was examined by Fluorescence microscopy from 24 hours and up to 7 days post-transfection. 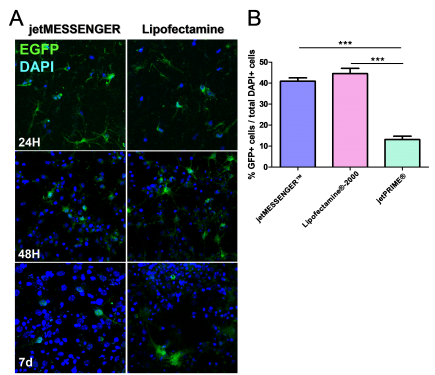 Since neurospheres contain a mix of cell types, we studied which cell type is preferentially targeted by each transfection reagents. To this end, immunohistochemistry using antibodies directed against markers expressed in NSCs (GFAP and SOX2) or astrocytes (GFAP) was performed. For each reagent, the EGFP signal was mostly detected in the cytoplasm of (i) NSC co-expressing SOX2 and GFAP and (ii) SOX2+ progenitors (Fig 3A). 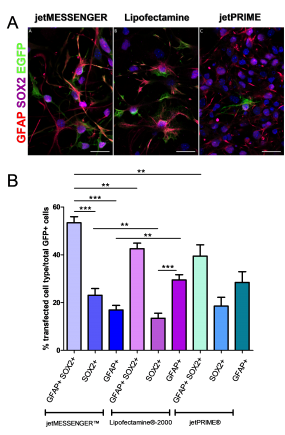 To target different cell types within the neurosphere, such as neuronal stem cells and progenitors, mRNA delivery using jetMESSENGER® was the most efficient approach.

In the future, we will use a mRNA delivery approach for our gene expression experiments in Neurospheres using jetMESSENGER® as it is the most efficient way to target our cells of interest, Neuronal Stem Cells and progenitors.