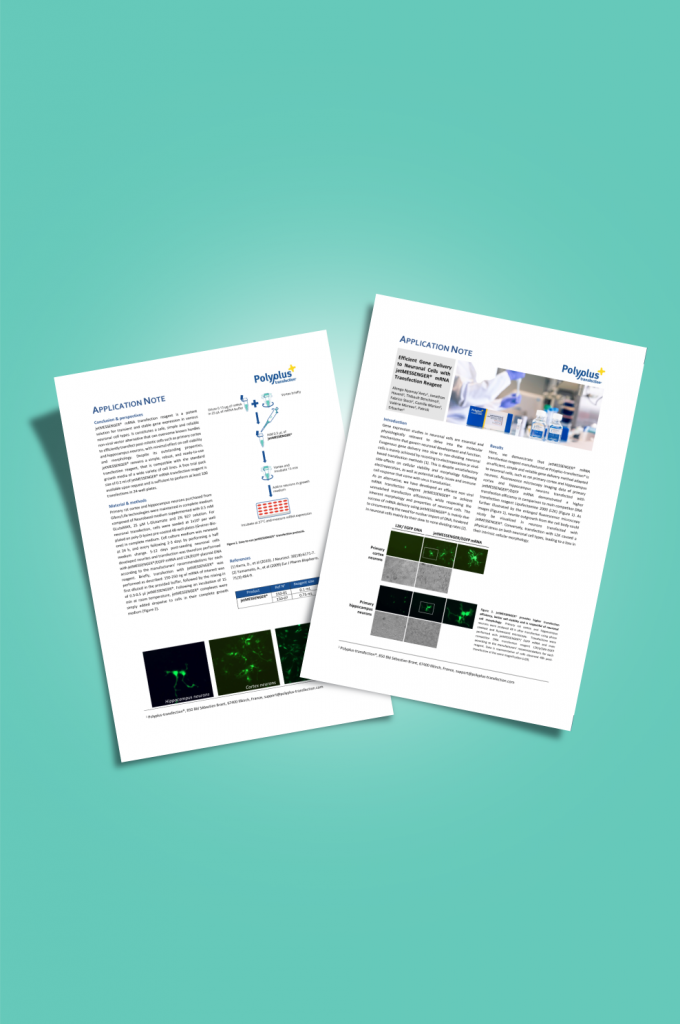 Gene expression studies in neuronal cells are essential and physiologically relevant to delve into the molecular mechanisms that govern neuronal development and function. Exogenous gene delivery into slow to non-dividing neuronal cells is mainly achieved by resorting to electroporation or viral-based transfection methods (1). This is despite unsatisfactory side-effects on cellular viability and morphology following electroporation, as well as potential safety issues and immune cell response that come with virus transduction.
As an alternative, we have developed an efficient non viral mRNA transfection reagent jetMESSENGER® to achieve unmatched transfection efficiencies, while respecting the inherent morphology and properties of neuronal cells. The success of mRNA delivery using jetMESSENGER® is mainly due to circumventing the need for nuclear import of DNA, hindered in neuronal cells mainly by their slow to none dividing rates (2).

Here, we demonstrate that jetMESSENGER® mRNA transfection reagent manufactured at Polyplus-transfection® is an efficient, simple and reliable gene delivery method adapted to neuronal cells, such as rat primary cortex and hippocampus neurons. Fluorescence microscopy imaging data of primary cortex and hippocampus neurons transfected with jetMESSENGER®/EGFP mRNA demonstrated a higher transfection efficiency in comparison to main competitor DNA transfection reagent Lipofectamine 2000 (L2K) (Figure 1). As further illustrated by the enlarged fluorescence microscopy images (Figure 1), neurite outgrowth from the cell body could nicely be visualized in neurons transfected with jetMESSENGER®. Conversely, transfection with L2K caused a physical stress on both neuronal cell types, leading to a loss in their intrinsic cellular morphology. 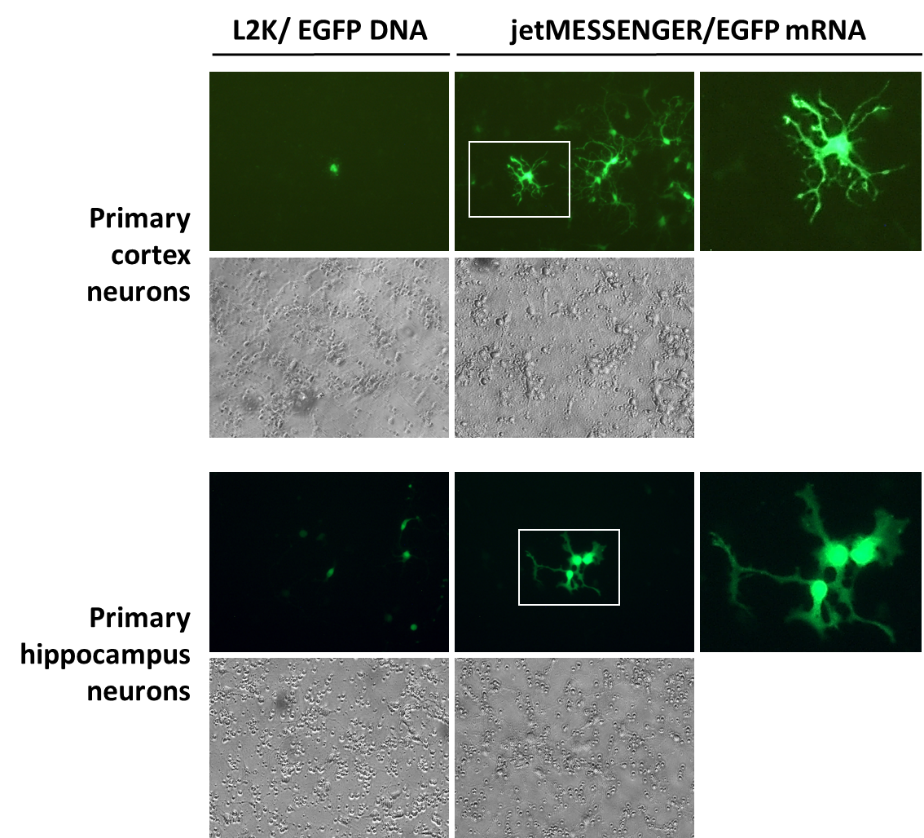 jetMESSENGER® mRNA transfection reagent is a potent solution for transient and stable gene expression in various neuronal cell types. It constitutes a safe, simple and reliable non-viral vector alternative that can overcome known hurdles to efficiently transfect post-mitotic cells such as primary cortex and hippocampus neurons, with minimal effect on cell viability and morphology. Despite its outstanding properties, jetMESSENGER® remains a simple, robust, and ready-to-use transfection reagent, that is compatible with the standard growth media of a wide variety of cell lines. A free trial pack size of 0.1 ml of jetMESSENGER® mRNA transfection reagent is available upon request and is sufficient to perform at least 100 transfections in 24-well plates.

Primary rat cortex and hippocampus neurons purchased from Gibco/Life technologies were maintained in complete medium composed of Neurobasal medium supplemented with 0.5 mM GLutaMAX, 25 µM L-Glutamate and 2% B27 solution. For neuronal transfection, cells were seeded at 1×105 per well plated on poly-D-lysine pre-coated 48-well plates (Greiner-Bio-one) in complete medium. Cell culture medium was renewed at 24 h, and every following 2-3 days by performing a half medium change. 5-12 days post-seeding neuronal cells developed neurites and transfection was therefore performed with jetMESSENGER®/EGFP mRNA and L2K/EGFP plasmid DNA according to the manufacturers’ recommendations for each reagent. Briefly, transfection with jetMESSENGER® was performed as described: 150-250 ng of mRNA of interest was first diluted in the provided buffer, followed by the mixing-in of 0.3-0.5 µl jetMESSENGER®. Following an incubation of 15 min at room temperature, jetMESSENGER® complexes were simply added dropwise to cells in their complete growth medium (Figure 2).