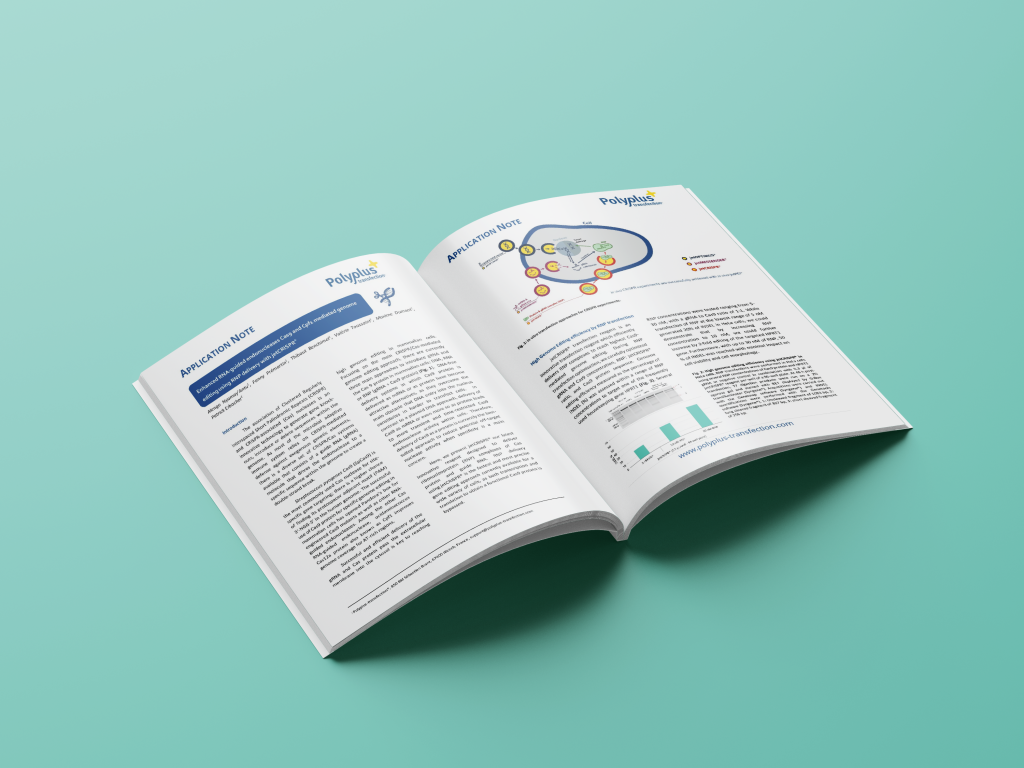 Introduction
The association of Clustered Regularly Interspaced Short Palindromic Repeats (CRISPR) and CRISPR-associated (Cas) nucleases is an innovative technology to generate gene knock-outs, introduce or delete sequences within the genome. As most of the microbial adaptive immune system relies on CRISPR-mediated defense against exogenous genetic elements, there is a diverse set of CRISPR/Cas systems available that consists of a guide RNA (gRNA) molecule that drives the endonuclease to a specific sequence within the genome to create a double-strand break.

Streptococcus pyogenes Cas9 (SpCas9) is the most commonly used Cas nuclease for site-specific gene targeting; there is a higher chance of finding its protospacer adjacent motif (PAM) 3’-NGG-5’ in the human genome. The successful use of Cas9 protein for specific genome editing in mammalian cells has opened Pandora’s box for engineered Cas9 mutants as well as other RNA-guided endonucleases. Among the other Cas RNA-guided endonuclease, acidaminococcus Cas12a protein also known as Cpf1 improves genome coverage for AT-rich regions.

Successful and efficient delivery of the gRNA and Cas protein pass the extracellular membrane into the cytosol is key to reaching high genome editing in mammalian cells. Focusing on the main CRISPR/Cas-mediated genome editing approach, there are currently three main approaches to introduce gRNA and the Cas 9 protein in mammalian cells: DNA, RNA or RNP (gRNA + Cas9 protein) (Fig. 1).  DNA-free delivery systems in which Cas9 protein is delivered as mRNA or as protein have become attractive alternatives, as they overcome the main obstacle that DNA entry into the nucleus constitutes in harder to transfect cells.  In contrast to a plasmid DNA approach, delivery of Cas9 as mRNA or even more so as protein leads to more transient and time-restricted Cas9 endonuclease activity within cells. Therefore, delivery of Cas9 as a protein is currently the best-suited approach to reduce potential off-target nuclease activity when specificity is a main concern.

Here, we present jetCRISPR® our latest innovative reagent designed to deliver ribonucleoprotein (RNP) complexes of Cas protein and guide RNA. RNP delivery using jetCRISPR® is the fastest and most precise gene editing approach currently available for a wide variety of cells, as both transcription and translation to obtain a functional Cas9 protein is bypassed. 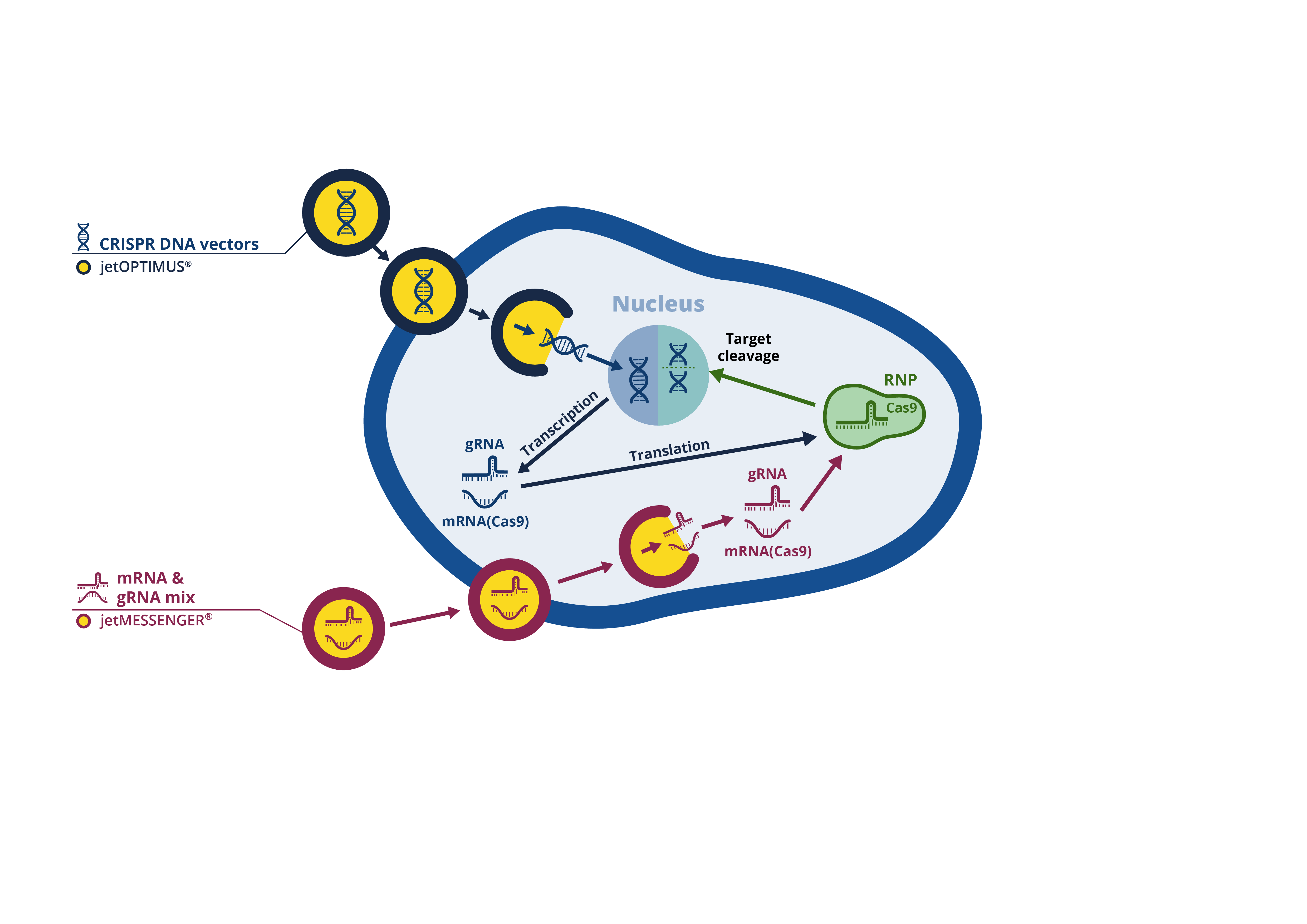 jetCRISPR® transfection reagent is an innovative transfection reagent which efficiently delivers RNP complexes to reach highest Cas9-mediated genome editing. During RNP transfection optimization, we carefully optimized gRNA and Cas9 concentration, RNP: jetCRISPR® ratio, and Cas9 protein sequence. Genome editing efficiency measured as the percentage of INDEL (%) was assessed within a range of RNP concentrations to target one of the frequently used housekeeping gene HPRT1 (Fig. 2). Several RNP concentrations were tested ranging from 5-30 nM, with a gRNA to Cas9 ratio of 1:1. While transfection of RNP at the lowest range of 5 nM generated 20% of INDEL in HeLa cells, we could demonstrate that by increasing RNP concentration to 10 nM, we could further increase by 2-fold editing of the targeted HPRT1 gene. Furthermore, with up to 30 nM of RNP, 50 % of INDEL was reached with minimal impact on cell viability and cell morphology.

Fig. 2: High genome editing efficiency using jetCRISPR® in HeLa cells. RNP transfections were performed in HeLa cells using several RNP concentrations of Cas9 protein and HPRT1 gRNA or negative control in combination with 0.3 µl of jetCRISPR® reagent per well of a 96-well plate. At 48 h post-transfection, T7 digestion products were run on a 2% agarose gel and stained with BET displayed by G:Box transilluminator (Syngene®). Acquisitions were carried out with the Genesnap software (Syngene®) and INDEL quantifications were performed with the Genetools software (Syngene®). 1: Uncleaved fragment of 1083 bp, 2: long cleaved fragment of 827 bp, 3: short cleaved fragment of 256 bp.

We could further show that the Cas9 protein sequence has an impact on genome editing efficiency. RNP transfection optimization with commercially available recombinant Cas9 proteins was performed in HEK-293 cells to target housekeeping gene HPRT1. As shown in Fig. 3, the number of Nuclear Localization Sequence (NLS) and protein tags, as well as their positioning in N- or C-terminus leads to differences in INDEL %. To this end, Polyplus-transfection provides the Cas9 protein – SpCas9 nuclease – that led to the highest genome editing efficiency compared to other commercially available Cas9 proteins; irrespective of RNP optimal concentration range. 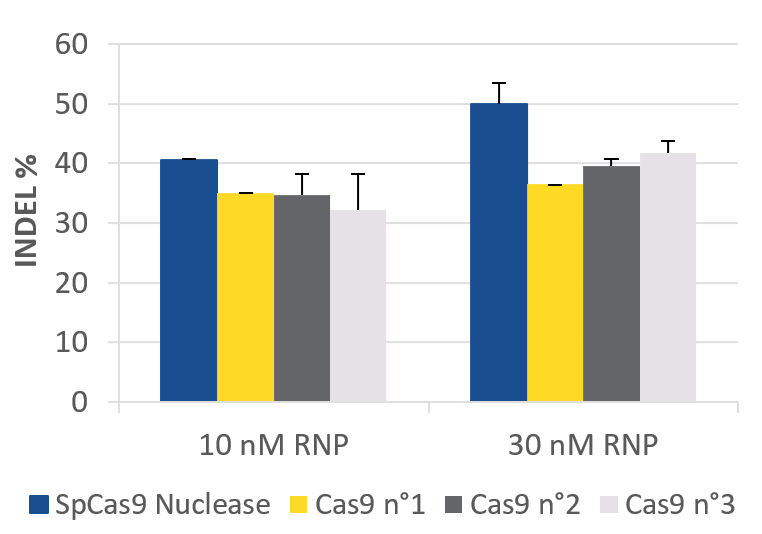 RNP transfection using jetCRISPR® is a straightforward 3-step process: assembling RNP complexes, mixing in of the transfection reagent and adding complexes onto cells. Both reverse and forward transfections have been successfully optimized with jetCRISPR®, hence facilitating the implementation of a protocol for a wide variety of cell types. In addition to its compatibility with different cell culture systems, jetCRISPR® transfection reagent systematically outperforms its main competitor by achieving higher genome editing efficiency, as illustrated in Table 1.

Table 1: Superior genome editing efficiency obtained with jetCRISPR® in comparison with Lipofectamine® CRISPRMAX™. RNP transfections were performed according to the manufacturer’s optimal recommendations using 10-30 nM RNP (Cas9 Protein and HPRT1 gRNA) with 0.3 µl of jetCRISPR® reagent or with 0.3 µl of Lipofectamine® CRISPRMAX™, per well of a 96-well plate. At 48 h post-transfection, genome editing was assessed by calculating the percentage (%) of INDEL using the T7 endonuclease assay. The INDEL % was determined with the Genetools software (Syngene®).

Delivery of Cpf1 /gRNA RNP complexes has proven to be more challenging. Currently, only physical methods such as electroporation are recommended by commercial Cpf1 protein providers. Polyplus-transfection is therefore pioneer in providing a transfection reagent jetCRISPR® for both Cas9 and Cpf1 RNP complex delivery. As summarized in Table 2, Cpf1 structurally and functionally differs from Cas9 protein. On a structural level, Cpf1 and its corresponding gRNA are smaller in size then their equivalent in the CRISPR/Cas9 system: the gRNA is only composed of the crRNA sequence without the adjacent tracrRNA sequence which is required to drive the Cas9 protein to the targeted DNA sequence. On a functional level, the endonuclease activity of Cpf1 differs from that of Cas9 by cleaving genomic DNA in a staggered manner to create 5’ overhangs instead of 3’ blunt end cuts. The overhang cut generated by Cpf1 is expected to reduce occurrence of blunt end mutations, as well as increase the correct insertion rate of engineered sticky DNA sequences in knock-in studies.

Table 2: Structural and functional comparison of CRISPR/Cas9 and CRISPRCpf1 systems.

During the optimization process for Cas9/gRNA RNP delivery into mammalian cells, we carefully optimized gRNA and Cpf1 protein concentration, as well as tested different Cpf1 protein formulation (data not shown). Genome editing efficiency measured as the percentage of INDEL (%), was assessed with recommended RNP concentration of 10-30 nM, using and with a gRNA to Cpf1 ratio of 1:1 to target housekeeping gene HPRT1 (Fig. 4). Consistently, jetCRISPR® outperformed its main competitor by achieving higher genome editing efficiency with Cpf1 RNP complexes (Fig. 4). 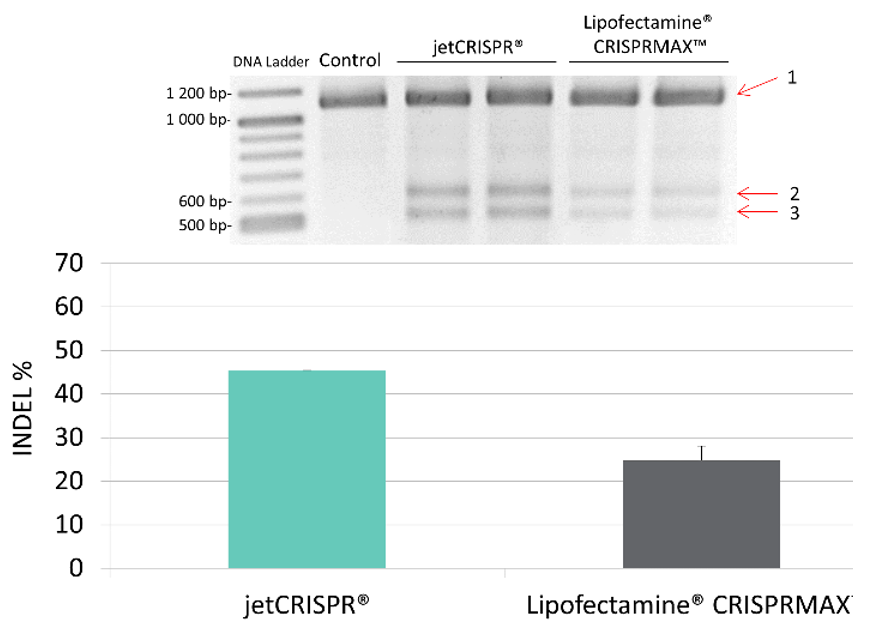 Fig. 4: High genome editing efficiency using jetCRISPR® and Cpf1 nuclease in HEK-293 cells. RNP transfections were performed in HEK-293 cells using a Cpf1 to HPRT1 gRNA ratio of 1:1 at a 30 nM concentration, following our recommended protocol for a 96-well plate format. At 48 h post-transfection, T7 digestion products were run on a 2% agarose gel and stained with BET displayed by G:Box transilluminator (Syngene®). Acquisitions were carried out with the Genesnap software (Syngene®) and INDEL quantifications were performed with the Genetools software (Syngene®). 1: Uncleaved fragment of 1083 bp, 2: long cleaved fragment of 578 bp, 3:  short cleaved fragment of 505 bp.

Conclusion
Successful delivery of the gRNA and the preferred Cas protein into cells is essential to guarantee the high genome editing efficiency that is required to generate new cell or animal models. The most efficient CRISPR-Cas method is based on the direct delivery of pre-complexed gRNA and Cas protein, referred to as Ribonucleoprotein (RNP) delivery. RNP transfection has many advantages compared to plasmid or mRNA approaches: a better control over Cas9 or Cpf1 endonuclease activity, reduced amount of off-target effects, and increased post-transfection cell viability. With our recently launched RNP transfection reagent jetCRISPR®, we provide a full range of reagents for all Cas9 and Cpf1-based CRISPR approaches (Table 1).

Use the leading technology for CRISPR/Cas9 RNP delivery!