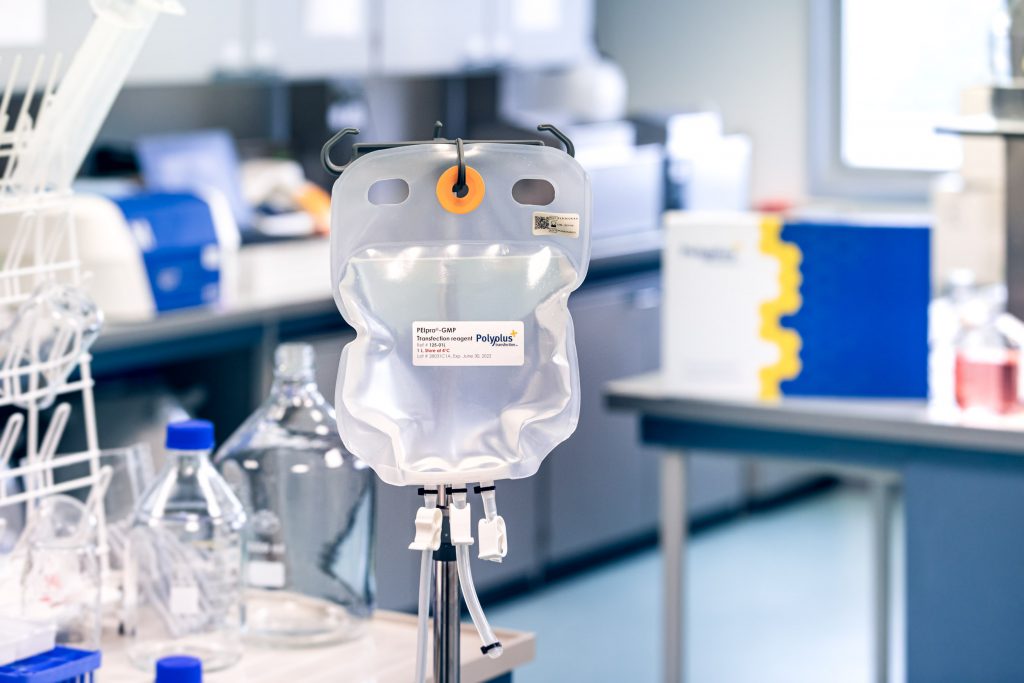 Are suspension-based systems for cell and gene therapy key to commercial-scale manufacture?

“What we are seeing in the gene and cell therapy field is that more and more virus manufacturers are coming to us with their suspension cell systems that can support very high cell density per culture volume.”

Patrick Erbacher, PhD. is the CSO of Polyplus-transfection® SA. With more than 20 years of experience in developing nucleic-acid based delivery reagents for research, biologics, Patrick has driven the development of innovative transfection reagents for several key applications, including mRNA-based gene expression, RNA interference, CRISPR-based genome editing and biologics production at R&D and industrial scale.

What is your take on the current status of viral vector manufacturing for gene and cell therapy?

PE: The first successes of cell and gene therapy prompted us to anticipate future demands for the production of viral vectors at the commercial level, especially for AAV viral vectors that require more production capacity to be able to treat patients. Many clinical trials of rare diseases are in very advanced clinical stages that will lead to rapid commercial approvals. At this stage, demand for viral vectors will require industrial production from manufacturers to meet the needs of patients. Despite the current efforts in building new factories to manufacture these viral vectors, current productivity does not seem to be able to meet emerging demands. In addition to addressing the capacity shortage, there are specific leverage points that can improve production efficiency, primarily the optimization of plasmid DNA, cell line, transfection reagent and cell culture medium. These leverage points play a role during the development phase of the upstream process.

There is the recurrent question of adherent or cell culture systems. Do you see a trend in the gene and cell therapy field?

PE: Adherent cell culture systems are historically more present in laboratories especially during early development processes. With adherent cell culture systems, cells are usually grown in presence of serum and on a standard 2D flatware which leads respectively to reproducibility and space limitation concerns. There are several ways to increase productivity by using specialized culture vessels instead of standard flatware, by increasing manual unit operations and by increasing cell density to overcome time and space limitations. What we are seeing in the gene and cell therapy field is that more and more virus manufacturers are coming to us with their suspension cell systems that can support very high cell density per culture volume. In the future, suspension systems will most likely be widely adopted for larger scale industrial processes, inspired by protein and antibody manufacturing trials. With these systems based on cell culture in suspension, the objective is to be able to adapt the production scale to the demand, reduce variability from one batch to another by eliminating various parameters of cell culture (for example, the seeding of cells, serum, etc.) and by simplifying the collection and purification of downstream viral vectors. In addition to the flexibility of these systems using cells in suspension, this approach using high cell densities can be more easily optimized and allow for much higher production yields. Manufacturers of viruses from suspension cells mainly produce AAVs for which a scaling approach is more appropriate since the objective is to increase the number of viral vector particles produced in order to obtain more doses to treat patients. For the production of lentiviruses used for CAR-T cell therapy, opting for an evolutionary approach in a more sophisticated adherent cell culture system, such as fixed bed bioreactors, is clearly an option. The advantage here is that you can quickly harvest the lentivirus from the supernatant.

As a provider of transfection solutions for Gene and Cell therapy, can you share your insight on the current needs for viral vector manufacturing?

PE: There are several critical parameters that should be considered when striving to improve productivity, and it is ideally during process development that theses parameters should be optimized to ensure later on process industrialization. Process development is divided into two parts: upstream development during which the virus is produced from the cell culture and downstream development during which the virus is purified. For AAV viral vector manufacturing, a 40-50% of recovery rate of viral vectors can be reached with the current set of tools. Hence, a 2-fold increase in recovery is the maximum that can be expected even with further improvements in downstream purification strategies. There is however still considerable room to increase viral vector yields by optimizing key parameters in the upstream development, including cell lines, cell culture media, plasmid DNA and transfection solutions. The idea in the field is to develop each of these components specifically for recombinant AAV production.

Regarding cell lines, the current aim is to develop suspension HEK-293 derived cell lines that grow at very high densities, are easy to culture at different scales of production and last but not least can produce high viral vector yields. For these cell lines to grow at high density and to produce higher yields, it is important to use a chemically-defined cell culture medium that can improve health of cells, notably by reducing cell clumping tendency which in turn negatively impacts transfection efficiency and cell viability. A related question is of course, stable or transient production of viruses? Transient transfection is the gold standard for viral vector production, because it leads to highest production yields and is a quick process. Generation of stable cell lines has not proven to be a reliable alternative to transient viral vector production. Stable cell line generation is time-consuming for in the end a lower productivity. Inducible expression systems have also been developed as an alternative to control in time production of viruses which are highly toxic to the cells, but these systems require further tuning for optimal expression. In the end, most commercially available stable cell lines are developed as packaging cell lines that still need to be transfected with a plasmid containing the gene of interest. Transient or stable, the question that remains is which transfection solution to efficiently deliver plasmids in order to achieve high viral vector yields? From a transfection solution developer’s point of view, we cannot control the number nor the size of plasmid DNA used, we also cannot control the synthetic medium and certainly not the cell line chosen by manufacturers. Hence from the get-go, we focused on developing a transfection reagent that would be used across-the-board, especially because we were seeing a rise in the use of different types of recombinant viral vectors, such as adenovirus, retrovirus, lentivirus and AAVs. This reagent PEIpro® is now the preferred transfection reagent for gene and cell therapy, especially because this is a robust reagent available at all quality grades. GMP compliant PEIpro®-GMP is highly sought after for commercial grade manufacturing.

Transfection being a key step for the upstream process, what do you see as innovation requirements for this step?

PE: With our expertise in developing transfection reagents dedicated to viral vector production, we developed the transfection reagent PEIpro® that allows production of viral vectors in adherent and suspension cell systems from process development up to larger scale manufacturing. Since its commercialization in 2012, we’ve been continuously working hand in hand with viral manufacturers to optimize large-scale transfection. For this, our initial focus was to improve process performance by maintaining comparable infectious virus titer yields during scale-up process, and to meet quality requirements for commercialization by launching PEIpro®-GMP. We are now on to the next challenge: increasing viral vector yields to meet the growing demands especially for AAV manufacturing, which is currently the most promising viral vector for gene therapy. More precisely, we are developing a new transfection reagent dedicated to AAV production in suspension cells. By narrowing the window of use of this new reagent, we are convinced that we can maximize AAV viral yields, while maintaining reproducibility at different production scale.