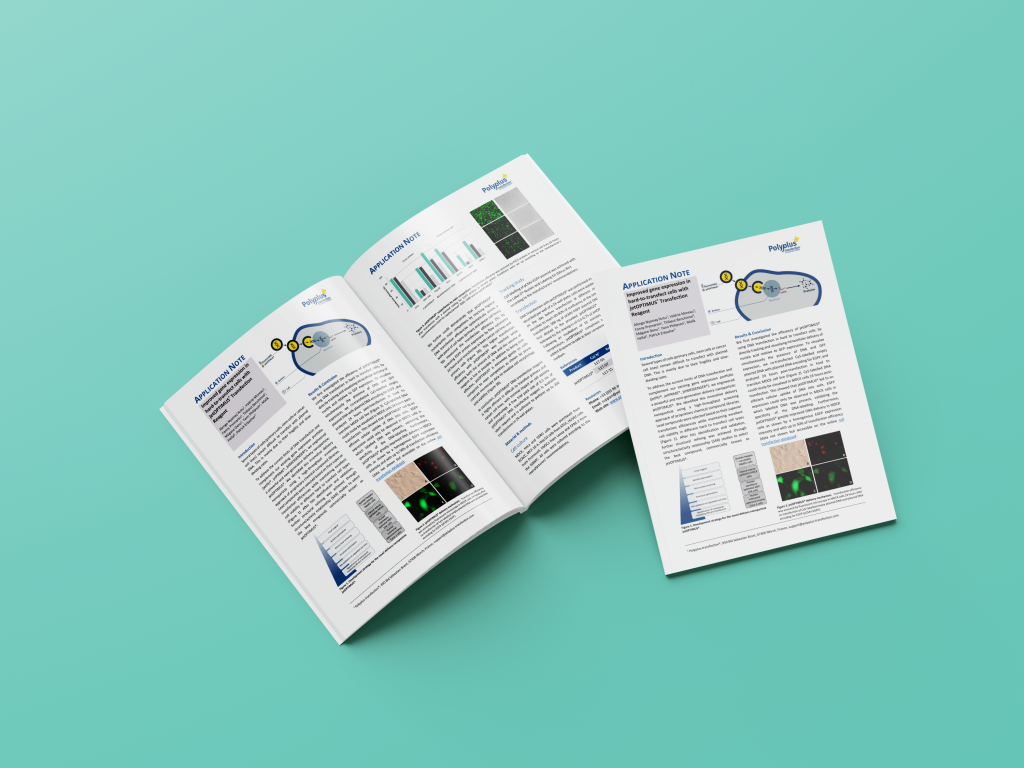 Several types of cells (primary cells, stem cells or cancer cell lines) remain difficult to transfect with plasmid DNA. This is mainly due to their fragility and slow-dividing rates.
To address the current limits of DNA transfection and complement our existing gene expression portfolio (jetPEI®, jetPRIME®, jetMESSENGER®), we engineered a powerful and next-generation delivery nanoparticle: jetOPTIMUS®. We identified this innovative delivery nanoparticle using a high-throughput screening approach of proprietary chemical compound libraries. Lead compounds were selected based on their superior transfection efficiencies while maintaining excellent cell viability in different hard to transfect cell types (Figure 1). After hits identification and validation, further structural refining was achieved through structure/activity relationship (SAR) studies to select the best compound, commercially known as jetOPTIMUS®. 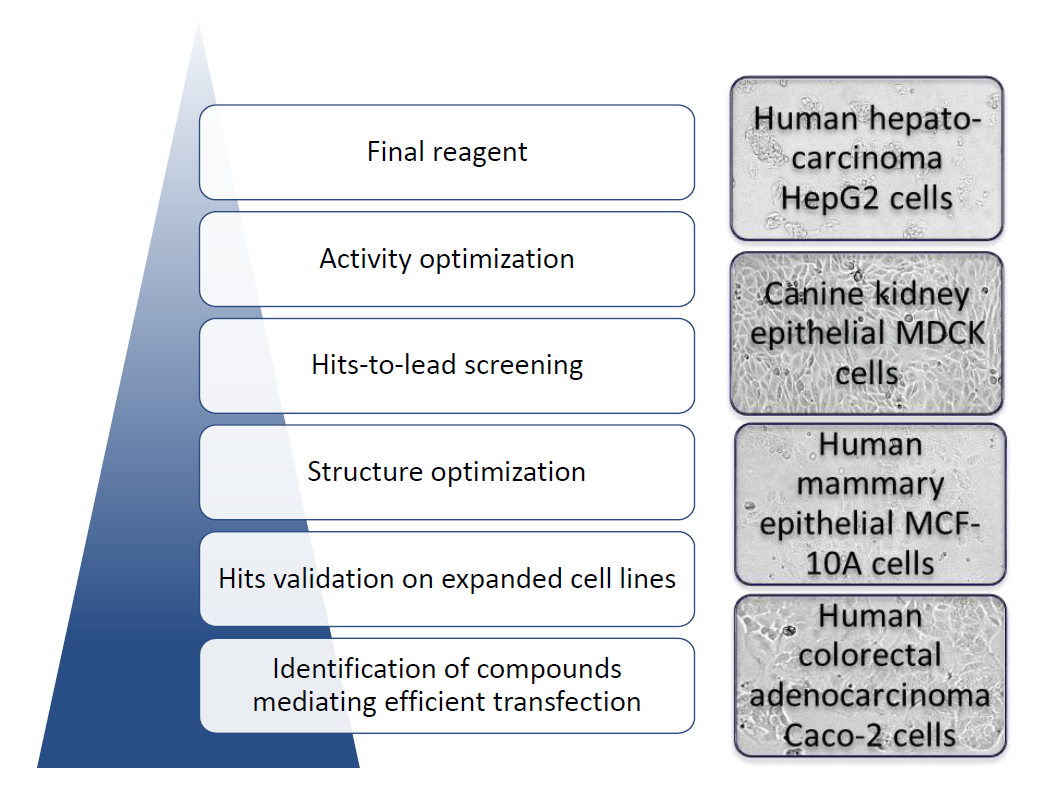 We first investigated the efficiency of jetOPTIMUS® using DNA transfection in hard to transfect cells, by directly tracking and visualizing intracellular delivery of nucleic acid relative to GFP expression. To visualize simultaneously the presence of DNA and GFP expression, we co-transfected Cy5-labelled empty plasmid DNA with plasmid DNA encoding for EGFP, and analyzed 24 hours post-transfection in hard to transfect MDCK cell line (Figure 2). Cy5-labelled DNA could nicely be visualized in MDCK cells 24 hours post-transfection. This showed that jetOPTIMUS® led to an efficient cellular uptake of DNA into cells. EGFP expression could only be observed in MDCK cells in which labelled DNA was present, validating the specificity of the DNA-labelling. Furthermore, jetOPTIMUS® greatly improved DNA delivery in MDCK cells as shown by a homogenous EGFP expression intensity and with up to 50% of transfection efficiency (data not shown but accessible on the online cell transfection database). 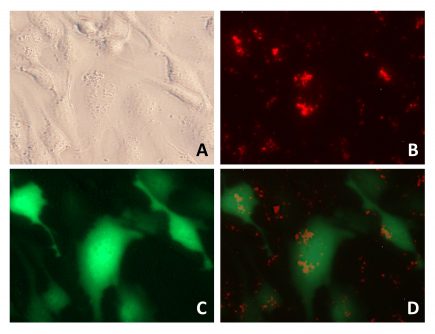 We further could demonstrate that jetOPTIMUS® outcompetes main competitors by reaching highest DNA transfection efficiencies systematically across a wide panel of cell types (primary and cancer cell lines). We measured the transfection efficiency (%) by assessing EGFP protein expression by flow cytometry 24 hours post-transfection in both cancer cell lines and primary cells (Figure 3A). This higher transfection efficiency with jetOPTIMUS® was reached while keeping both the amount of DNA and the volume of reagent as low as possible. In addition to being cost-effective, jetOPTIMUS® is extremely gentle on cells compared to main competitors as shown by phase contrast microscopy data to visualize cell morphology and viability (Figure 3B).

Figure 3. jetOPTIMUS® outperforms its main competitors. Transfection efficiency was assessed by FACS analysis in various cell lines 24 hours after transfection with a plasmid coding for EGFP protein in 24-well plates. Conditions were set up according to the manufacturer’s recommendations both for Lipofectamine® 3000, 2000 and for jetOPTIMUS®.

Cell culture
MDCK, HeLa and VERO cells were purchased from ECACC, MCF-10-A, Hep G2 cells from ATCC, HUVEC cells from Promocell, hMSCs from Lonza and CPRE-2 from the IGBMC. All cells were cultured according to the manufacturers’ recommendations.

Tracking study
Cy5 labelling of pCMV-EGFP plasmid was achieved with the Label iT® Nucleic acid Labeling Kit (Mirus Bio)
according to the manufacturers’ recommendations.

Transfection
DNA Transfection with jetOPTIMUS® was performed as described per well of a 24-well plate: cells were seeded on the day before transfection at different cells densities to reach 60-80% of confluency at the time of transfection. 500 ng of pCMV-EGFP plasmid DNA was first diluted in the provided jetOPTIMUS® buffer, followed by the mixing-in of 0.5-0.75 µl jetOPTIMUS®. Following an incubation of 10 minutes at room temperature, jetOPTIMUS® complexes were simply added dropwise to cells in their complete growth
medium.