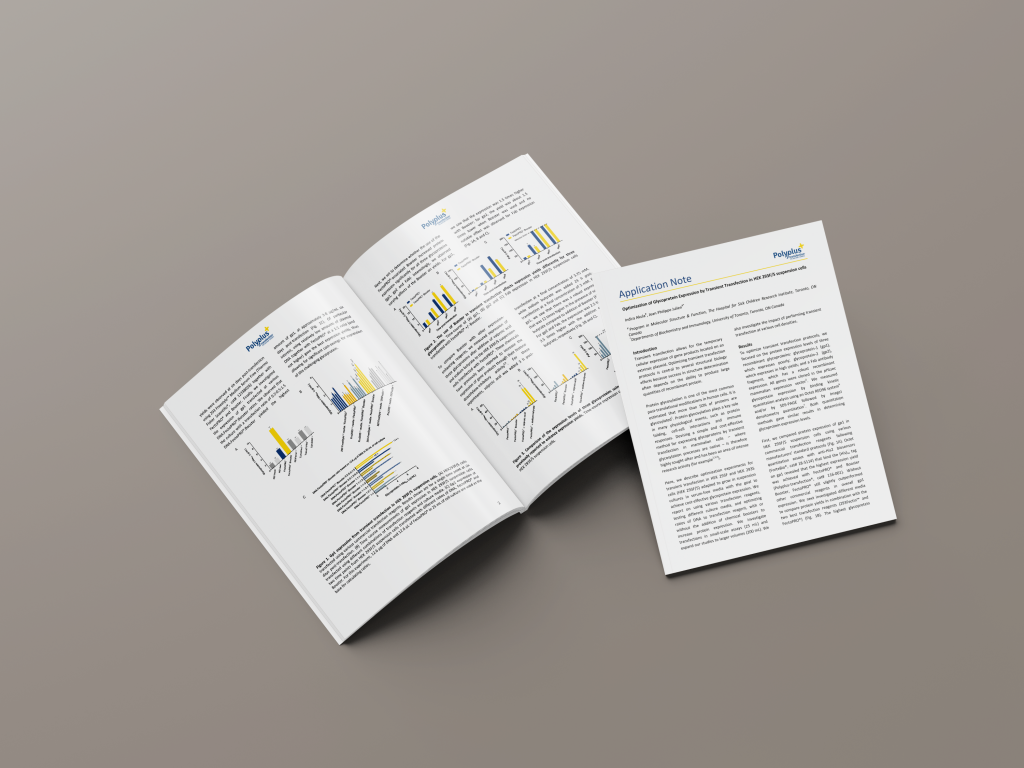 Protein glycosylation is one of the most common post-translational modifications in human cells. It is estimated that more than 50% of proteins are glycosylated. Protein glycosylation plays a key role in many physiological events, such as protein folding, cell-cell interactions and immune responses. Devising a simple and cost-effective method for expressing glycoproteins by transient transfection in mammalian cells – where glycosylation processes are native – is therefore highly sought-after and has been an area of intense research activity. Here, we describe optimization experiments for transient transfection in HEK 293F and HEK 293S cells (HEK 293F/S) adapted to grow in suspension cultures in serum-free media with the goal to achieve cost-effective glycoprotein expression. We report on using various transfection reagents, testing different culture media, and optimizing ratios of DNA to transfection reagent, with or without the addition of chemical boosters to increase protein expression. We investigate transfections in small-scale assays (25 mL) and expand our studies to larger volumes (200 mL). We also investigate the impact of performing transient transfection at various cell densities.

First, we compared protein expression of gp1 in HEK 293F/S suspension cells using various commercial transfection reagents following manufacturers’ standard protocols (Fig. 1A). Octet quantitation assays with anti-His2 biosensors (ForteBio®, cat# 18-5114) that bind the (His)6x tag on gp1 revealed that the highest expression yield was achieved with FectoPRO® and Booster (Polyplus-transfection®, cat# 116-001). Without Booster, FectoPRO® still slightly outperformed other commercial reagents in overall gp1 expression. We next investigated different media to compare protein yields in combination with the two best transfection reagents (293Fectin™ and FectoPRO®) (Fig. 1B). The highest glycoprotein yields were observed at six days post-transfection using 293 Freestyle™ Medium Serum Free (Thermo Fisher Scientific®, cat# 12338026) together with FectoPRO® and Booster. Finally, we investigated the expression of gp1 transfected at various DNA:FectoPRO®:Booster ratios. We observed that the culture with a transfection ratio of 0.5:0.5:1.5 DNA:FectoPRO®:Booster yielded the highest amount of gp1, at approximately 3-8 µg/mL six days post-transfection (Fig. 1C). Of particular interest, using relatively low amounts of plasmid DNA together with FectoPRO® at a 1:1 ratio (and not higher) gave the best expression yields, thus allowing for significant cost-savings for expression of this challenging glycoprotein. 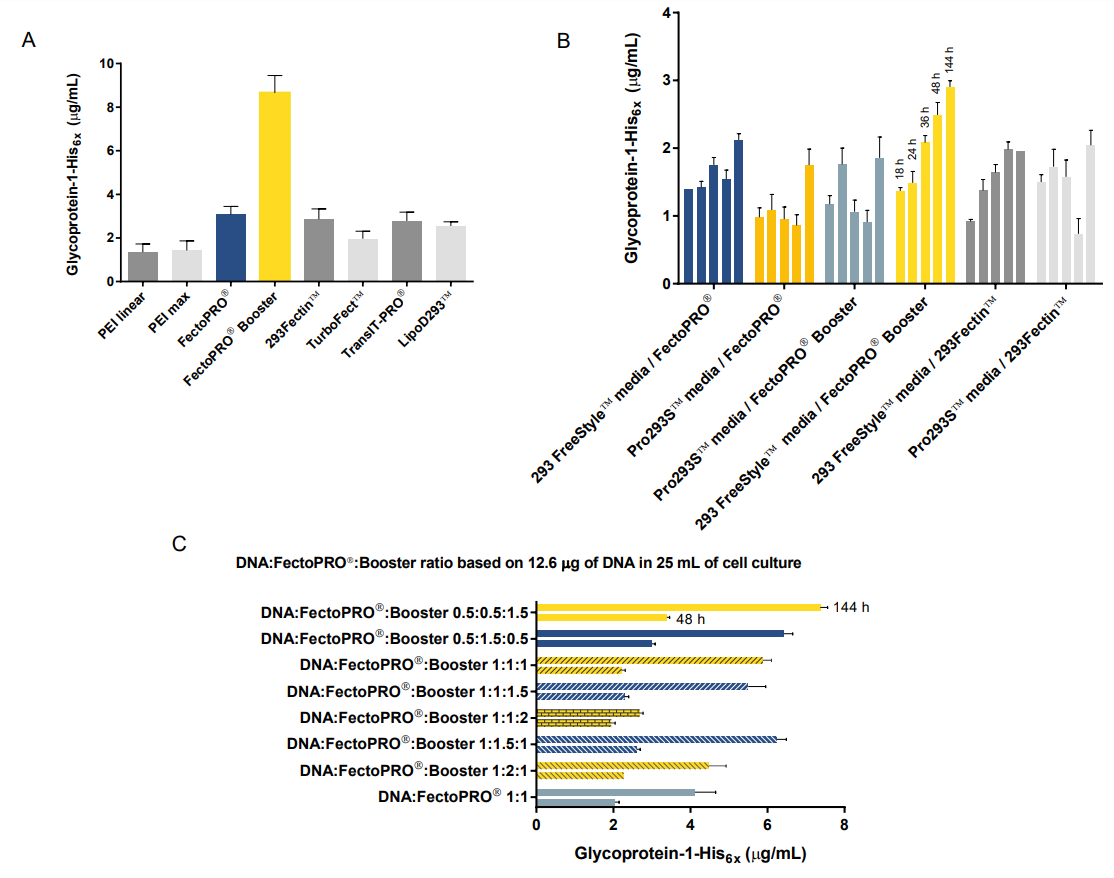 Next, we set to determine whether the use of the FectoPRO®-associated Booster increased protein expression significantly for all three glycoproteins (gp1, gp2 and Fab). Interestingly, we observed varying effects of the Booster on yields. For gp1, we saw that the expression was 1.5 times higher with Booster; for gp2, the yield was about 1.5 times lower when Booster was used and no notable effect was observed for Fab expression (Fig. 2A, B and C).

Figure 2. The use of Booster in transient transfection affects expression yields differently for three glycoproteins. Time-course of (A) gp1, (B) gp2 and (C) Fab expression in HEK 293F/S suspension cells transfected with FectoPRO® +/- Booster.

To compare Booster with other expressionenhancing reagents, we measured expression of three glycoproteins after addition of valproic acid and sodium butyrate to the HEK 293F/S suspension cells transfected with FectoPRO®. These chemicals have previously been reported to increase the expression of gene products through their histone deacetylase-inhibitory activity8. For these experiments, valproic acid was added 3 h post transfection at a final concentration of 3.75 mM, while sodium butyrate was added 24 h posttransfection at a final concentration of 2 mM. For gp1, we saw that there was a robust expression that was 12 times higher in the presence of sodium butyrate compared to addition of Booster (Fig. 3A). For gp2 and Fab, the expression was 2.5 times and 3.5 times higher with the addition of sodium butyrate, respectively (Fig. 3B and C).

Finally, we investigated the effect that cell density has on expression yields. For this purpose, transient transfections of the high-expressing gp2 was done using FectoPRO® in both 25 mL and 200 mL cultures with HEK 293F/S cells seeded at densities ranging between 0.5 and 2.0 X 106 cells/mL. In the small scale experiments, we observed that the samples seeded between 1.0 and 1.2 X 106 cells/mL yielded the highest amount of protein, whether in the presence or absence of chemical booster (Fig. 4A). Seeding the cells at a density between 1.0 and 1.5 X 106 cells/mL also gave the highest protein expression for transfections performed in larger scale (Fig. 4B). 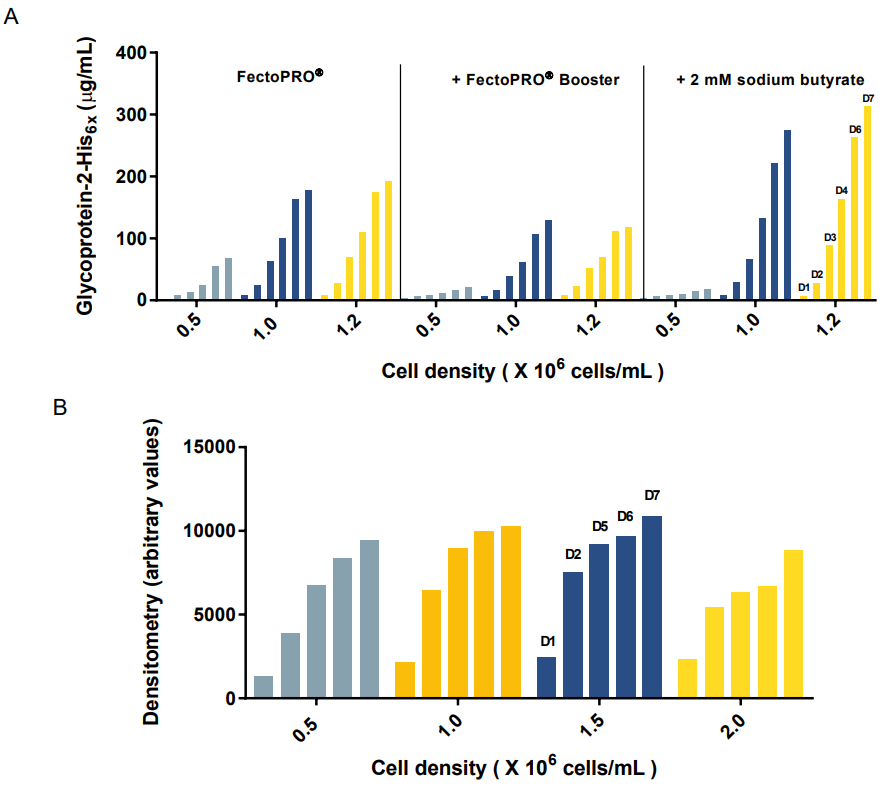 Apweiler R, Hermjakob H, Sharon N. On the frequency of protein glycosylation, as deduced from analysis of the SWISS-PROT database. Biochim Biophys Acta. 1999; 1473: 4–8.