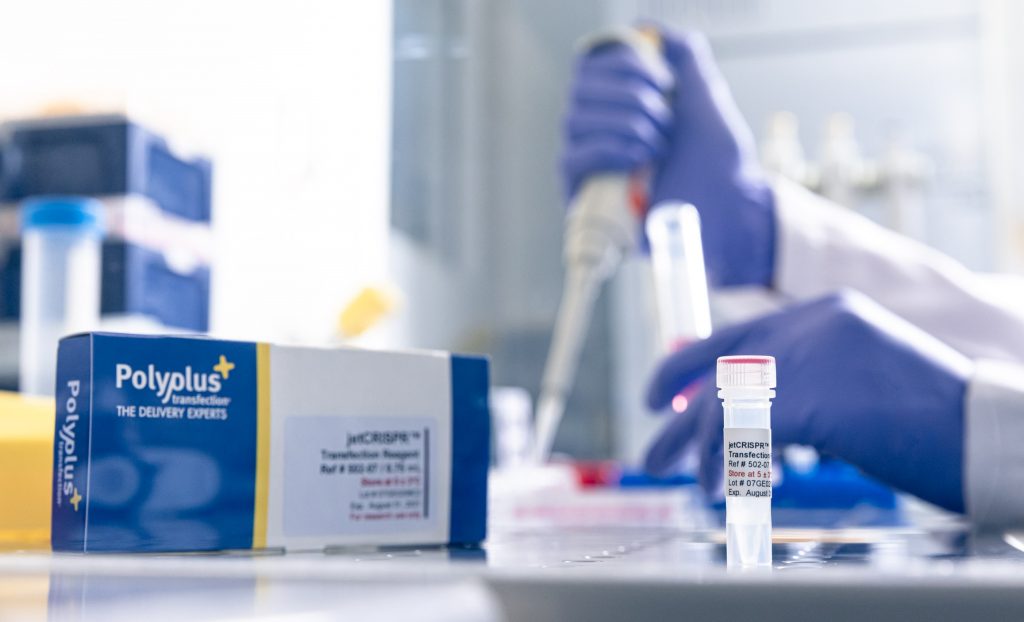 Genome editing with the best products

CRISPR-Cas9 is the state-of-the-art technology for gene editing. Among the different delivery approaches available, DNA plasmids are a more stable and straightforward method that results in improved gene editing efficiency and reduced costs. Polyplus-transfection® offers premium transfection reagents – jetOPTIMUS® and in vivo-jetPEI® – that guarantees enhanced delivery of plasmid DNA for efficient gene editing in vitro and in vivo.

The Clustered Regulatory-Interspaced Short Palindromic Repeats (CRISPR) and the endonuclease CRISPR-associated system 9 (Cas9) compose the defense mechanism of prokaryotes against repeated viral infection. The CRISPR-Cas9 system comprises two elements – a single guide RNA (gRNA) that identifies and binds to the region of interest, and the Cas9 endonuclease that cleaves the DNA. The ability to synthesize specific gRNAs allowed the CRISPR-Cas9 system to become a powerful gene-editing technique with promising therapeutic applications. Different approaches are available to deliver the combo gRNA and Cas9 to the cell: in particular, DNA plasmid or mRNA encoding the gRNA and the Cas9 protein are both widely used options by scientists worldwide (Fig. 1). Each approach has its pros and cons, but using DNA plasmids may ultimately result in optimum delivery, efficiency, specificity, and cost.

The simplicity and versatility of the CRISPR-Cas9 system have allowed its use in many different applications, including gene knockout and knock-in in both in vitro and in vivo studies.

A classical use for gene editing techniques includes studying protein function and distribution, and many investigators have used CRISPR-Cas9 for this purpose. Kock et al., 2018 described a protocol for generating cell lines that endogenously express proteins fused to fluorescent markers. Their approach yielded functional fluorescent molecules, which allowed real-time monitoring of protein expression levels and cellular distribution. Deletion of specific genes is another approach frequently employed to investigate the function of proteins. Wang et al., 2018 identified the protein Smc4 as a candidate to promote inflammatory innate immune response and used gene editing to confirm their findings. Deletion of the Smc4 gene using CRISPR-Cas9 resulted in reduced TLR- and virus-triggered expression of cytokines IL-6, TNF-α, and IFN-β in macrophages  (Wang et al., 2018) CRISPR-Cas9 also allows in vivo genetic editing to investigate the function of proteins. Zukerman et al., 2015 used this technique to delete candidate tumor suppressor genes in a developing mouse, which resulted in the growth of malignant brain tumors (Zuckermann et al., 2015).

Researchers have also explored therapeutic applications for CRISPR-Cas9. Cauwels et al., 2018 used CRISPR-Cas9 to express mutated human interferon α2 (IFNα2) in cell lines, which resulted in a cytokine nearly inactive in mouse cells. In this way, researchers generated a mutated IFN with potent anti-tumor activity and without the systemic toxicity frequently associated with the use of cytokines in cancer therapeutics. Another study used CRISPR-Cas9 to generate monocytes knockout for C-X-C chemokine receptor type 2 (CXCR2). Once infused in a mouse model of prostate cancer, these monocytes differentiated into a pro-inflammatory phenotype that expressed tumor necrosis factor-α (TNF-α), resulting in senescence and tumor inhibition (Di Mitri et al., 2019).

The studies above demonstrate the versatility of CRISPR-Cas9 as a genome-editing technique. Some factors – delivery of gRNA and Cas9, the stability of genetic material, the efficiency of gene editing, and tissue-specificity when performing in vivo applications – may, however, impose technical challenges.

Delivering the combo gRNA and Cas9 to the appropriate location within the cell is the first challenge associated with CRISPR-Cas9 technology. Depending on the cargo of choice, an efficient approach to carry these macromolecules across the plasma membrane, and in case of plasmid DNA, also nucleus membrane, is necessary.

When DNA plasmids are the choice of cargo, one or two plasmids encoding for the gRNA and Cas9 need to be engineered and delivered into the cell. The use of mRNA offers a similar advantage; however, DNA plasmids are more stable and hardier than mRNAs.

The use of DNA plasmids may also result in higher genome editing efficiency, measured by the percentage of insertion/deletion (indel) in the DNA. Because DNA plasmids are delivered to the nucleus, their use as cargo results in extended expression of the Cas9 endonuclease, which results in higher percent indel than other methods. In fact, Kock et al., discussed in great detail their choice of DNA plasmid to generate cell lines expressing homozygous fluorescent gene knock-ins. The authors noted that “the Cas9-RNP approach with its current performance is not suitable for this pipeline at the moment.” and subsequently concluded that “the paired Cas9D10 nickase plasmid-based approach described in this protocol remains the optimal procedure for the generation of human cell lines with homozygous fluorescent gene knock-ins at the moment.”

Finally, DNA plasmids are the only cargo option that allows the addition of a promoter activated by tissue-specific transcription factors, which may optimize the use of the CRISPR-Cas9 system for in vivo applications. Although DNA plasmids reach various organs, the synthesis of gRNA and Cas9 will only occur in tissues expressing the relevant transcription factors. The result is organ-, tissue- and even cell type-specific gene editing.

As previously mentioned, the fact that DNA plasmids need to cross two physical barriers – plasma membrane and nucleus membrane – is one of the significant drawbacks of using this approach. Polyplus-transfection® commitment to develop state-of-the-art reagents to improve transfection efficiency and optimize the use of DNA plasmid for CRISPR-Cas9 applications allowed to provide efficient solutions to overcome this limitation.

The reagent jetOPTIMUS® is a cationic nanoparticle developed to address three major challenges associated with transfection of adherent mammalian cells: cellular uptake, lysosomal degradation, and cell fragility. jetOPTIMUS® is a potent transfection agent that enables up to 80% efficiency while minimizing the volume of reagent and amount of DNA required (as little as 0.25 mg). This renders jetOPTIMUS® an added benefit – cost-effectiveness. Because DNA plasmids need to reach the nucleus after entering the cell, jetOPTIMUS® also ensures improved endosomal escape. Finally, adherent mammalian cells transfected with jetOPTIMUS® show improved viability and morphology.

Polyplus-transfection® also offers a reagent specially designed for in vivo transfections – in vivo-jetPEI®. Polyethenine (PEI) is a cationic polymer that promotes efficient DNA plasmid DNA, improves endosomal escape, and enables delivery of genetic material to the nucleus. The reagent in vivo-jetPEI® was particularly developed to deliver nucleic acid to various organs in any animal models, and many researchers have successfully used it for this purpose. Transfection of preclinical animal models using in vivo-jetPEI® follows a simple, straightforward, 2-step process: complexation of nucleic acid and polymer and direct injection into the animal. Different injection sites promote optimal transfection of genetic material into specific organs. As in vivo-jetPEI® combines increased precision, efficiency, and safety, it has been the reagent of choice for various drug development and clinical trial studies.

Specific conditions for many cell types can be found in our Cell Transfection Database or you may contact our delivery experts at support@polyplus-transfection.com for a tailored protocol for your experiments.

Cauwels, A, & al. (2018) A safe and highly efficient tumor-targeted type I interferon immunotherapy depends on the tumor microenvironment. Oncoimmunology. 2018;7(3):e1398876.