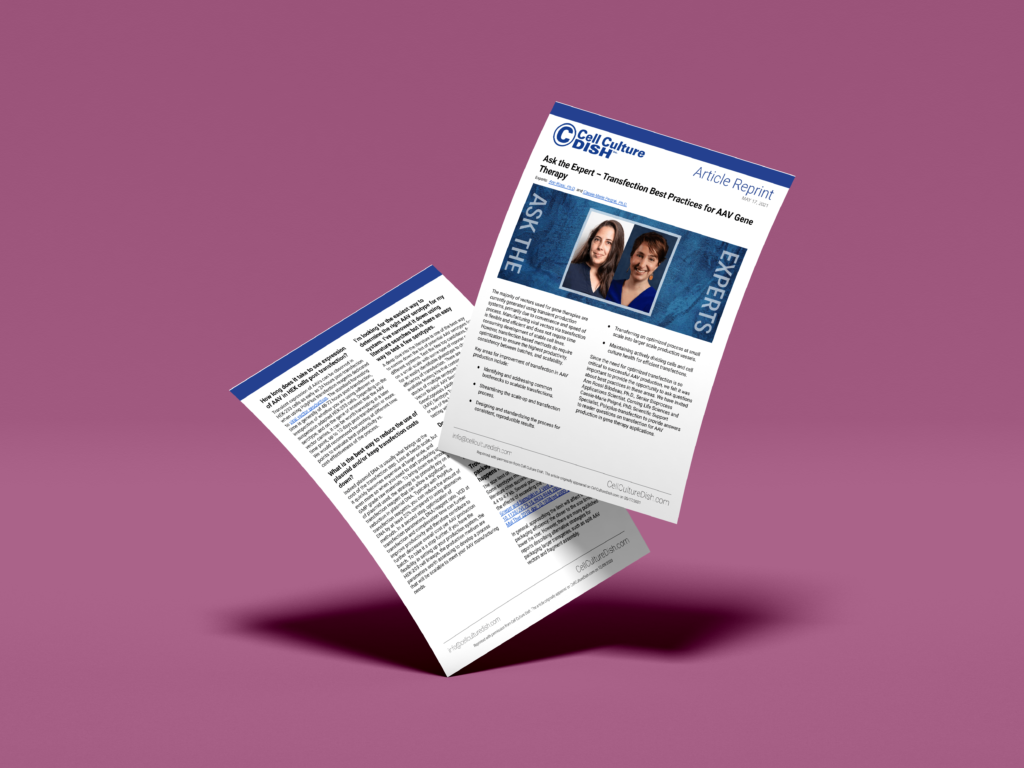 The majority of vectors used for gene therapies are currently generated using transient production systems, primarily due to convenience and speed of process. Manufacturing viral vectors via transient transfection is flexible and efficient and does not require time consuming development of stable cell lines. However, transfection based methods do require optimization to ensure the highest productivity, consistency between batches, and scalability.

The biopharmaceutical market, one of the fastest growing segments in the life sciences industry, is valued at approximately USD 325.17 billion in 2020(1). The segment is expected to continue its upward trajectory at a compound aggregate growth rate of 7.32% from 2021 to 2026, reaching anticipated revenues of USD 496.71 billion in 2026. The rapid expansion of this market has occurred for good reasons: biopharmaceuticals such as cell and gene therapies hold great promise to be more effective, better-targeted treatments for difficult-to-treat diseases across a wide variety of medical conditions, including cancer and cardiovascular, neurodegenerative, ocular, and immunologic diseases.

For gene therapy, the challenge is determining the best method for getting genetic material into the nucleus of the target cells. Recombinant adeno- associated viral (rAAV) vectors are one of the most commonly used delivery methods because they are nonpathogenic, have low immunogenicity, and can be designed to target multiple cell types. Thus, AAV vectors have been utilized for stable gene expression in hundreds of clinical trials. Once viral vectors are identified as the modality of gene delivery, the manufacturing of vectors must be considered. The production platform must be reliable and scalable in order for therapeutics to successfully reach production capacity under GMP conditions.

There are two basic methods for growing cells in culture: adherent (i.e., as mono- layers on a substrate) or suspension (i.e., free-floating in culture medium).

Adherent culture has historically been the go-to method for viral vector production; the technique is well established and, in many cases, produces higher viral titers. Moreover, transfection of adherent cell lines is relatively straightforward, especially at small scale, which can shorten development time— an important factor in the fast-moving biopharmaceutical industry where time to regulatory approval is of the essence. Yet, adherent platforms that use stacked culture vessels might require scale-out beyond a certain scale, occupying a larger footprint and creating inherent variability in processing a large number of vessels in a scale-out process. More recently, there has been movement among manufacturers toward using suspension culture because suspension culture is generally easier to scale-up, when preferred to a scale-out strategy. The decision of which system is best is not simple. When choosing adherent versus suspension lines, manufacturers must balance a host of complex factors such as the cell type and medium, the intended size of the final product lots (scale-out vs. scale-up), manufacturing constraints such as the amount of cleanroom space available, and the time needed for process development. In the end, manufacturers need to carefully consider which platform is best suited for the application and end product—and how to ensure it is highly reproducible at a larger scale.

When scaling transfections for viral vector production, there are several bottlenecks to avoid that are common to both adherent and suspension culture, ensuring the process is reproducible and robust.

There should be a robust process in place for transfection, including preparation of the transfection mix and addition to the vessel(s), because problems with transfection efficiency and/or low viral titer may not reveal themselves until the process is scaled-up/out. It is analogous to baking a cake: commercial bakeries do not simply multiply the quantities of a single-batch recipe to fill bakery shelves. Instead, they prepare recipes that have been specifically created for a large volume with the correct chemistry and ratio of ingredients so that a customer can always be sure to walk away with a cake that tastes the same. It is critically important that the production system, including transfection protocol and reagents, have been developed for large-scale processes.

Moreover, the system should be adapted to easily transition from small- scale process development through manufacturing. Manufacturers should seek guidance to design the best platform and transfection for their specific application from suppliers of the products utilized in the process (e.g., cell culture vessels or the transfection reagent).

Manufacturers can follow these simple steps as a roadmap for streamlined transfection.

Spend sufficient time optimizing your culture, ensuring you have healthy, actively dividing cultures in order to even start doing transfections. The time spent maintaining and characterizing the cultures upfront will pay off by streamlining transfection optimization.
Understand how your cultures grow, especially cell yield and growth rate, in whatever vessel will be used for the final transfection. Cell density is a key parameter for transfection optimization because the amount of DNA and transfection reagent should be calculated per million of cells to transfect, rather than total surface area. Having well-characterized cell cultures will make it easier to fine- tune the amount of transfection reagents and DNA needed and the timing of transfections. Ultimately, predictable cell growth will result in a more robust process for reproducible viral titer yields.
Turn to reagents that have been optimized for your processes and that are scalable. For instance, Polyplus has reagents for both adherent and suspension systems. PEIpro® is a linear polyethylenimine (PEI) transfection reagent that binds to DNA through electrostatic interactions during cationic polymer transfection. The reagent-DNA complex enters the cell by endocytosis and releases the DNA cargo into the cytoplasm. Water solubility and performance in serum-based culture media eliminate the need for medium changes before or after transfection, making this method ideally suited for large-scale transfections of adherent cells in Corning CellSTACK® culture chambers.
Design the scale-up/out process with the transitions from pilot scale to production scale in mind. A scale-down model for process development should mimic the AAV production process at the final production scale, whether the final scale is intermediate or large, adherent or suspension. As an example for adherent cultures: Corning HYPERFlask® vessels or Corning HYPERStack® 12-layer vessels can serve as the process development vessel for a final scaled-out production in a Corning HYPERStack 36-layer vessel; Corning CellSTACK 1-layer culture chambers or CellSTACK 2-layer culture chambers model larger scale cultures in CellSTACK 10-layer or CellSTACK 40-layer culture chambers; Corning CellCube® 10-layer or CellCube 25-layer modules directly scale to CellCube 100-layer modules.

Summary
Gene therapy based on rAAV vectors has been used in hundreds of clinical trials. rAAV has an excellent safety profile, targets a wide range of tissues, and provides long-term stable transgene expression. However, achieving high-titer vector yields in a cost-effective, timely manner is challenging. Researchers developing cell and gene- based therapies are often on aggressive timelines in an attempt to bring much needed therapeutics to market quickly. Thus, the tried-and-true method of transient production by transfection of adherent cell cultures remains commonplace to generate high titers. Case in point, a recent publication chose transfection of HEK293T/17 cells in Corning CellSTACK 10-layer culture chambers with PEIpro® to generate the quantity of virus needed to develop and optimize various methods of downstream processing. (2)

Regardless of the production platform, planning scalable processes from cell expansion through transfection to harvest and downstream processing is critical for generating high-titer yields. There are numerous considerations when deciding on a production platform and certainly no “one-size-fits-all” solution to reach the highest titers. Seek the expertise of the cell culture vessel manufacturers, like Corning, and transfection experts like Polyplus, to help design an appropriate upstream process for each specific application.