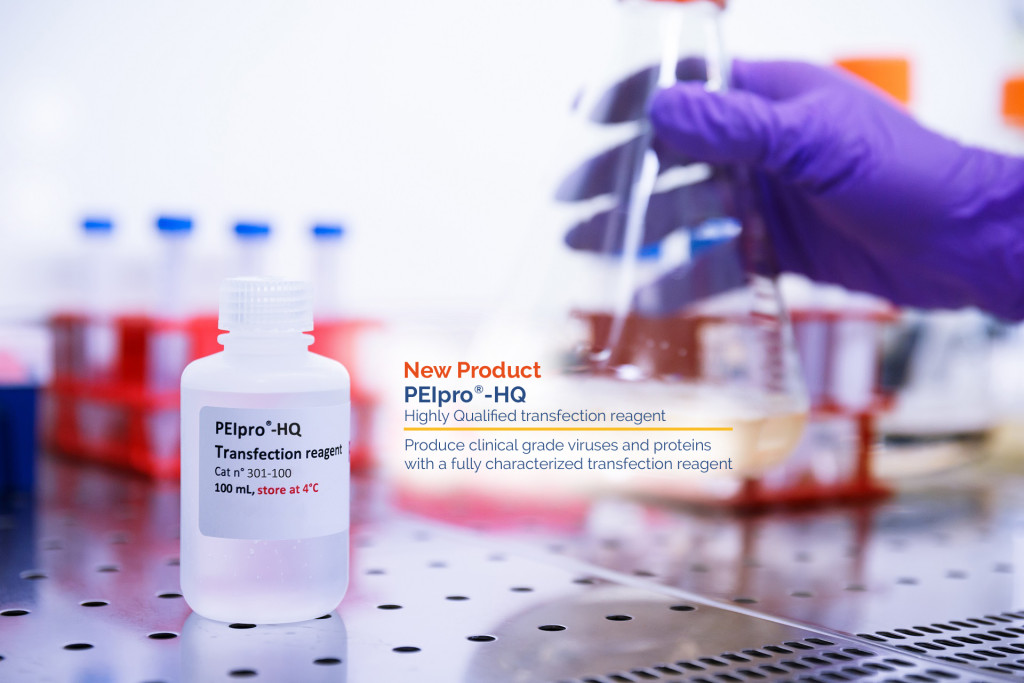 The unique “one-size-fits-all” PEI from process development to clinical grade virus production for use in GMP processes.

Initially intended for treatment of hereditary single-gene defects, most gene therapies are also currently targeting acquired diseases such as cancer, cardiovascular and neurodegenerative pathologies. The recrudescence of viral vector-based preclinical and clinical trials is attributed to the advances made in developing new viral vector systems guided by safety, specificity and potency considerations.

While substantial efforts have been made in fine-tuning plasmid vector design to improve titer and transgene expression, one of the current bottlenecks that needs to be addressed is the transition from small scale development towards a large-scale manufacturing process that can support potential commercial requirements. While stable viral production would at first appear to be the easiest option, there remain considerable drawbacks, with respect to generation of efficient producer cell lines and maintenance of reproducible titer yields over time. Therefore, the majority of virus production is currently achieved by transient gene expression (TGE) (Merten et al., 2016).

Considerable efforts have thus been made to overcome existing limiting aspects of TGE systems, in terms of cell lines, cell culture-based systems, and high viral titer production in a GMP-compliant and cost-effective manner. In most cases, transfection reagents that are used in small to large scale virus production include calcium phosphate, cationic lipids and polyethylenimine (PEI). Calcium phosphate appears to be the economical option; it is in fact a cumbersome transfection method that requires rigorous control and large quantities of DNA. While the use of cationic lipids leads to less inter-experimental variability, the imputed cost and cellular toxicity are detrimental to their use in large scale virus vector production. Conversely, PEI is widely used due to its affordability, high DNA delivery efficiency, and reproducibility during upscaling in both adherent and suspension cells, unlike calcium phosphate that is inefficient for transfection of cells grown in suspension. Several PEIs of different molecular weights and chemical properties that were not specifically developed for transfection are commercially available. These PEIs are poorly characterized in terms of chemical structure and purity, and cannot guarantee high reproducibility in virus titer production.

Today, with the extensive characterization and Quality Controls that are required for cGMP viral vector production, PEI must be sourced from qualified suppliers, and have gone through rigorous testing to ensure reliable transfection efficiencies and hence reproducible virus production. PEIpro® and PEIpro®-HQ, provided and manufactured by Polyplus-transfection®, are the unique PEIs developed for transfection and suitable for virus production from process development up to use in GMP processes.

For several years now, PEIpro® has proven to be the gold standard for small to large-scale production of various viruses, notably adenoviruses, lentiviruses, adeno-associated viruses (AAV) and lately virus-like particles (Venereo-Sanchez, et al., 2016). PEIpro® benefits from extensive research development in polymer chemistry and formulation, in terms of polymer structure, deacetylation degree, polydispersity index and molecular weight. The polymer branching structure is directly correlated with the availability of protonable amines, which affects the global charge of the polymer. Formation of positively charged reagent/DNA complexes is essential to obtain a higher transfection efficiency, rendering linear PEIs preferable to branched PEI. The polydispersity index should be close to 1, as different lengths of PEI in the final product lead to heterogenous complex size formation, and to unwanted batch-to-batch titer variations. In addition, the molecular weight of PEI should be carefully optimized for high transfection efficiency with minimal cellular toxicity (Figure 1). PEIpro® and PEIpro®-HQ are the unique commercially available PEIs that fulfill the aforementioned characteristics. 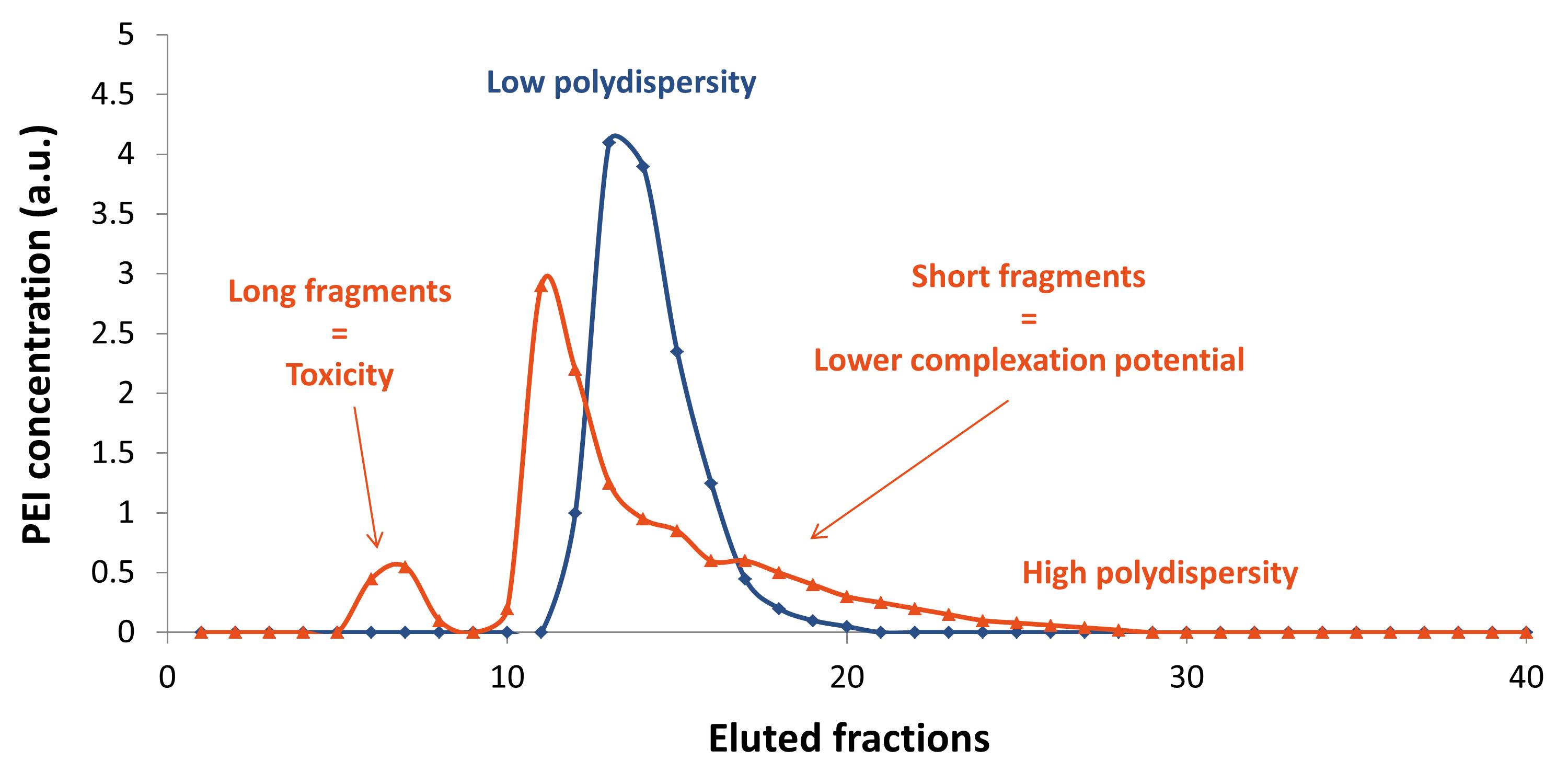 To fulfill all the quality requirements associated with the use of PEIpro® in manufacturing of recombinant viral vectors for Human clinical trials, Polyplus-transfection® supplies a higher quality grade PEIpro®, PEIpro®-HQ. PEIpro® and PEIpro®-HQ are fully synthetic animal free reagents identical in chemistry and formulation. Therefore, protocols established with PEIpro® during the initial development stage can be directly used with PEIpro®-HQ to keep producing identical virus titer yields during clinical batch manufacturing. PEIpro®-HQ is produced and formulated following a strict manufacturing process, with, in addition, extensive characterization and quality testing to ensure that each produced batch fulfills the pre-determined specifications for identity, potency, purity, traceability and safety (Figure 2). Accordingly, each batch of PEIpro®-HQ is tested and provided with extensive documentation on the batch production and quality controls, allowing its use as a qualified raw material in GMP processes and providing confidence to clinical investigation teams and regulatory authorities regarding batch-to-batch consistency, comparability, quality and traceability. 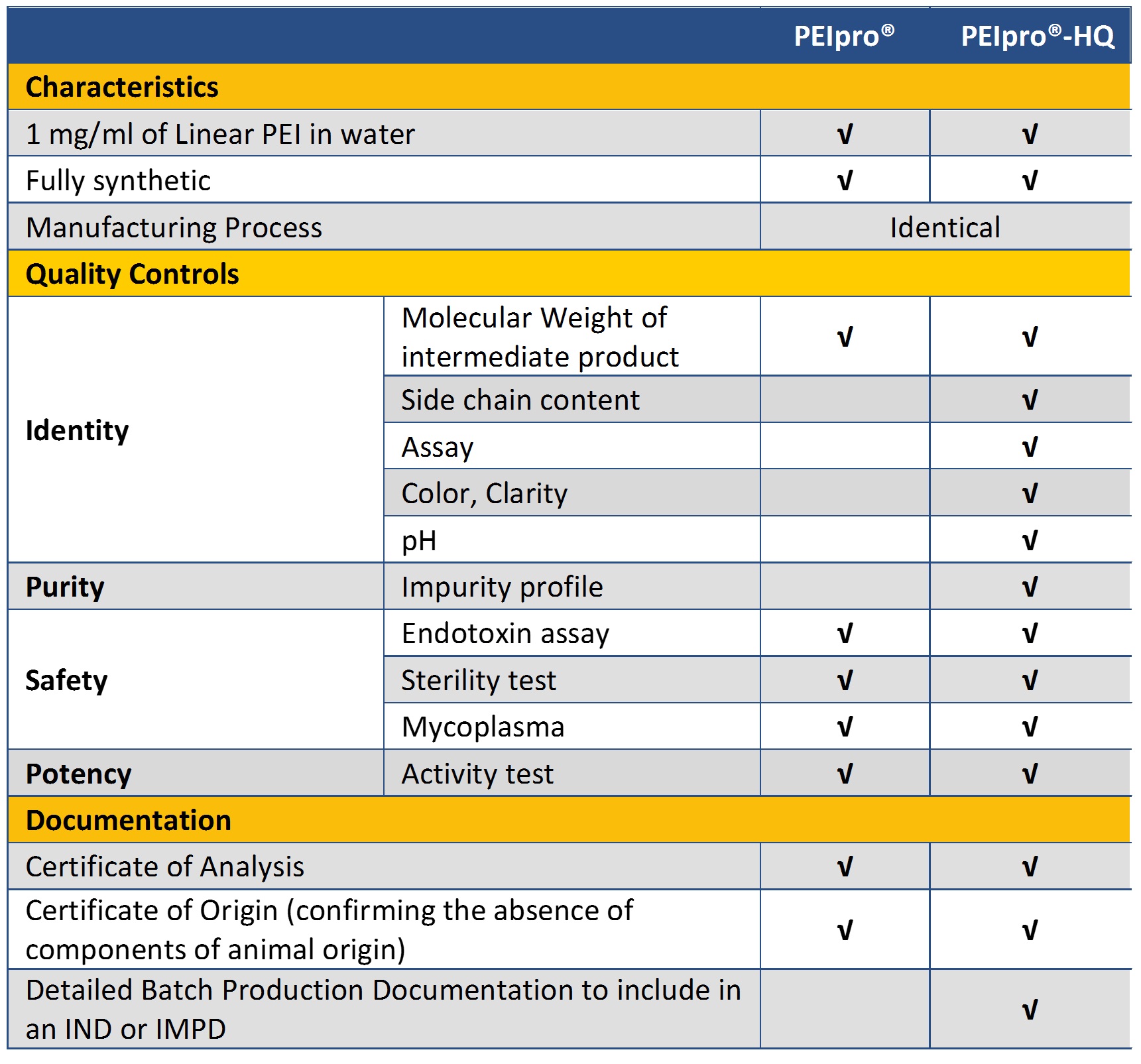 Figure 2. PEIpro®-HQ is a highly-qualified grade of PEIpro® reagent. The quality of PEIpro® and PEIpro®-HQ are continuously assessed during the manufacturing process with suitable control testing. In comparison to PEIpro®-HQ, a more extensive number of Quality Controls are performed on both the bulk material and the formulated product to assess identity, purity, safety and potency of PEIpro®-HQ.

In addition, there is a growing demand to assess residual levels of any raw material used in the manufacturing process of clinical products, in order to demonstrate that raw materials/impurities are removed during the purification process of the Final Drug Product. Therefore, Polyplus-transfection is also developing a specific analytical method to detect and quantify any residual PEIpro® and PEIpro®-HQ present in the Final Drug Product.

With PEIpro® and its high-quality counterpart PEIpro®-HQ, a time and cost-effective solution is now available to facilitate transition from initial optimization during process development up to large-scale therapeutic viral vector production. PEIpro®, and hence PEIpro®-HQ are powerful and versatile DNA transfection reagents that can be used in most of the current mammalian cell-based TGE systems for virus production, regardless of cell types, culture conditions, culture vessels and viral vectors used. Irrespective of the cell culture-based system and production scale, PEIpro® and PEIpro®-HQ have led to efficient viral vector yields superior to 107 IG/ml and 1011 -1012 VG/ml, respectively for lentiviruses and adenovirus/AAV. Moreover, titer yields obtained with PEIpro® and its high-quality counterpart PEIpro®-HQ are superior to viral titers obtained with main competitors, notably other commercially available PEIs as well as calcium phosphate.

During process development for viral production, optimization of virus production is often achieved in adherently grown cells, as this remains the standard traditional laboratory set-up. Depending on the type of viral vector, different subtypes of HEK-293 cells are preferred such as HEK-293 for adenovirus and AAV virus production, HEK-293T and HEK-293FT for AAV and lentivirus production (Pringle et al., 2014). Commonly used adherent-based cell systems (flasks, cell factories and roller bottles) are generally difficult to scale-up, as they favor mishandling risks during the increased processing time that manipulation of a higher number of culture vessels requires. A variety of alternative culture vessels have thus been developed, while acknowledging time and space concerns. These alternative culture vessels include multilayers flasks such as HYPERFlasks™ and HYPERstacks™ (Corning), or fixed-bed culture systems such as iCELLis® bioreactors (Pall), which alike standard culture vessels are compatible with the use of PEIpro® and PEIpro®-HQ. The iCELLis® is an innovative solution to increase volumetric productivity, which in combination with the use of PEIpro® has led to substantial increases in viral titer yields, reaching higher AAV viral titer yields of 9.0 x 1014 VG per square meter of fixed bed (Powers et al., 2016).
Several animal-free synthetic media are also commercially available to maintain high productivity in cells lines adapted to growth in suspension. Accordingly, the use of suspension-based cell systems has substantially grown as they offer considerable advantages in simplifying the scaling-up process, in terms of cell culture conditions, harvesting and downstream viral vector purification steps. PEIpro® and PEIpro®-HQ are the reagents of choice for virus production in both adherent and suspension cells, and in serum-containing media and commercially available synthetic media.

With the great momentum in viral vector-based gene therapy, the need for cGMP manufacturing has become a major concern, in terms of large-scale production and quality requirements for future commercialization. Combined with appropriate and advanced quality controls, as well as lot release testing for PEIpro® and PEIpro®-HQ, Polyplus-transfection® is a pioneer in offering a unique commercially available PEI-based transfection reagent that can support academics and biopharmaceutical companies from the initial small scale development phase to large scale clinical virus production. In addition, Polyplus-transfection® has a long-standing expertise in providing high quality and personalized technical support to accompany customers and partners throughout their process development and cGMP biomanufacturing. To support growing viral vector-based commercialization demands, Polyplus-transfection® is continually establishing innovative solutions for improved viral vector manufacturing capacity and higher quality grade Final Drug Product.

This article has been published in GEN.