Transient gene expression (TGE) is commonly used for medium scale production of recombinant proteins and antibodies in suspension CHO cell lines. This approach allows production of sufficient protein amounts for “proof of concept” studies or tools validation, prior to moving on to time-consuming, but cost-effective production of stable cell lines at large scale. Speed and flexibility of TGE has allowed this technique to be widely adopted in early phase discovery. There are two main bottlenecks in protein production that need to be addressed to make TGE profitable: increasing protein production yield and improving protein recovery yield.
To achieve high transient protein yields, TGE is dependent on an efficient transfection method. Polyplus-transfection® has therefore developed a protein production system, named FectoCHO® Expression System for optimal protein production in several commercially available suspension CHO cell lines. FectoCHO® Expression System consists of the association of FectoPRO® transfection reagent with a novel chemically-defined CHO medium: FectoCHO® CD Expression Medium. The latter is developed to improve protein production in various strains of CHO cells such as CHO-K1, CHO-S and ExpiCHO-S™. FectoPRO®-mediated transient transfection of CHO cell lines in this chemically defined medium leads to highest production yields of protein and antibody; with up to 4-fold increase in protein yields compared to competitors, while using low DNA amount (< 1 μg/mL of cell culture).
To recover the target protein, we chose flowthrough (FT) purification technologies, as they improve the throughput by reducing time and facilitating the operation. With MabXpure™, a novel truly single-use chromatography media, we increased recovery yield by combining size exclusion chromatography (SEC) and anion exchange (AEX). With SEC, we avoid the penetration of large proteins (e.g. mAbs) to the beads and their collection in the FT fraction. In the same time, AEX allows to capture the bioburden, such as host cell DNA, host cell proteins and other small molecules (Figure 1). The multimodal depletion of MabXpure™ also binds other classes of impurities that are usually depleted by hydrophobic interaction (HIC), cation exchange (CEX), mixed-mode (MM), dipole-dipole interactions, etc., which confers on this FT purification step an exceptional performance.
Synergistically, we show here that combining FectoCHO® Expression System (Polyplus-transfection®) with MabXpure™ (DAICEL Bioseparations) provides high expression and recovery of antibodies. 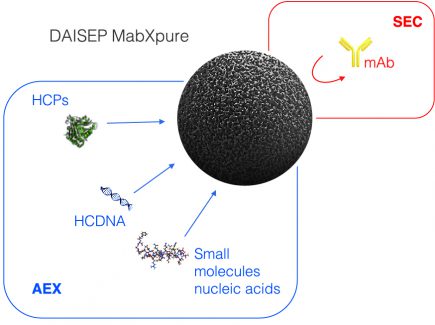 Commercially available ExpiCHO-S™ cells (Life Technologies, Carlsbad, CA) were grown in suspension culture in FectoCHO® CD Expression Medium supplemented with 100 U/mL of penicillin and 100 μg/mL of streptomycin, 1 % of Pluronic™-F68, and 8 mM L-glutamine. Cell cultures were maintained between 0.25 and 10 x 106 cells/mL in 125 mL Erlenmeyer flasks with vented cap, shaken at 130 rpm in an incubator at 37 °C with 8 % CO2.

ExpiCHO-S™ cells, cultured in FectoCHO® CD Expression Medium, were transfected with FectoPRO® transfection reagent, by using vectors coding for the heavy (HC) and the light (LC) chain of a recombinant chimeric IgG1 (Claudiximab).
The day of transfection, cells were counted and viability was measured before seeding 6 x 106 cells/mL in 90 mL of complete fresh FectoCHO® CD Expression Medium.
For the transfection with FectoPRO®, 0.8 μg of DNA was used per mL of cell culture, with a 1:2 (μg to μL) DNA to FectoPRO® ratio. DNA was pre-diluted in 10 mL of non-supplemented fresh FectoCHO® CD Expression Medium (corresponding to 10 % of the final culture volume), briefly vortexed and added to pure FectoPRO®. After 10 minutes of complexation at room temperature, the DNA:FectoPRO® complexation mix was added to the ExpiCHO-S™ cell culture. The cell culture was placed in an incubator at 37 °C; 8 % CO2, under agitation (130 rpm). Protein yields were analyzed on Day 7 post-transfection.

On Day 7 post-transfection, the whole cell culture was centrifuged (5 min, 210 g) and the supernatant was passed through a 0.22 μm filter. Clarified samples were then purified using MabXpure™ resin or protein A resin column.

Clarified samples were purified using a protein A agarose-based affinity resin column (Praesto® Jetted A50 (1 mL) HT Column from Purolite®), following the provider’s recommendations. The protein A affinity resin was first washed with 10 mL of binding buffer (NaHPO4 20 mM, NaCl 150 mM pH 7-7.4) at a rate of 1 mL per minute. Clarified samples were passed on the column at a similar rate for a total volume of 5 mL. After washing the resin with 10 mL of binding buffer at a rate of 1 mL per minute, IgG1 was eluted using 5 mL of acetic acid 0.1 M at a similar rate of 1 mL per minute and collected in a tube containing 500 μL of Tris-HCl 1 M buffer (100 μL/mL of sample).

IgG1 protein quantification was performed using the BLItz® System (ForteBIO®) according to the manufacturer’s instruction for protein A Biosensors (Dip and Read™ Protein A (ProA)). The quantity of IgG1 in each sample was measured in duplicates with the integrated BLItz Pro® software, using a previously established standard curve for Claudiximab. IgG1 quantification was performed at each purification step. 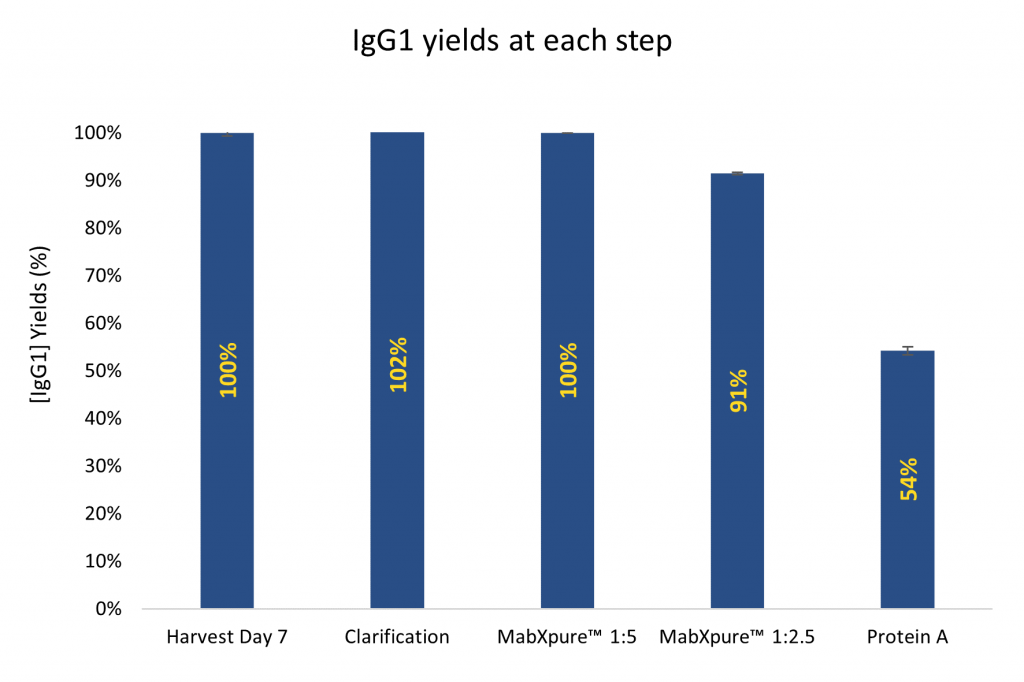 Figure 2: IgG1 yields/recoveries are significantly higher when using MabXpure™ resin compared to Protein A resin, with all recoveries higher than 90 %. IgG1 quantification was performed at each purification step using the BLItz® system (ForteBIO®) with protein A biosensors (Dip and Read™ Protein A (ProA)) 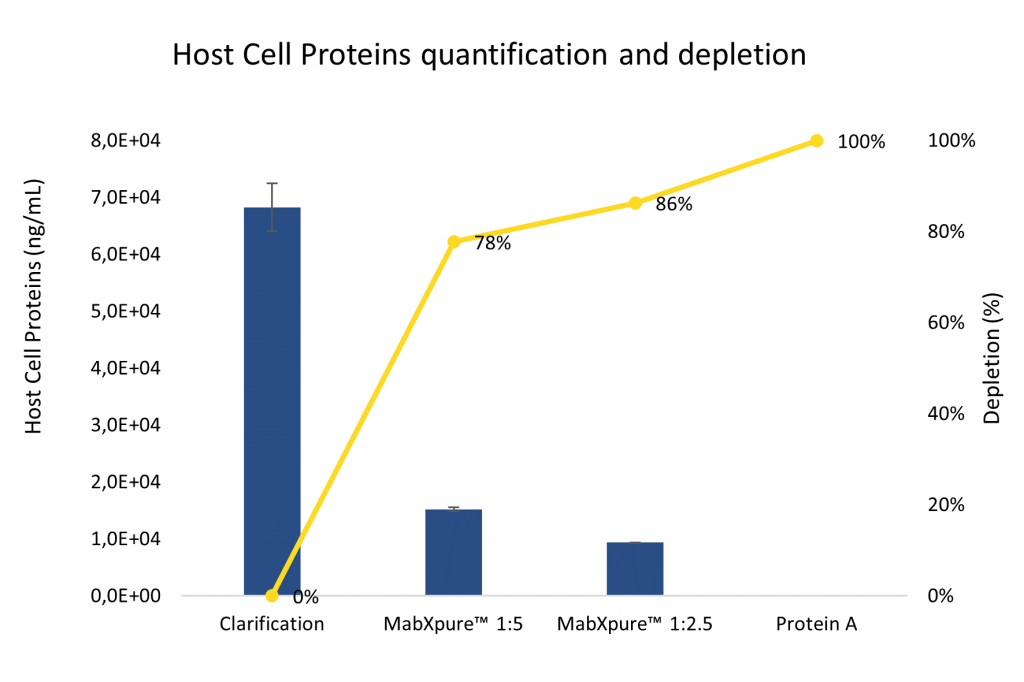 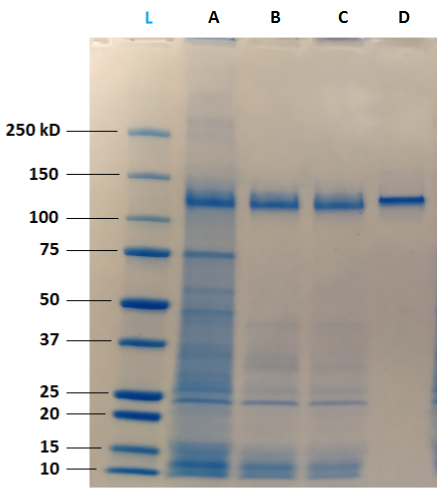 Figure 4: Qualitative analysis on SDS-PAGE reveals that clarified samples (A) contain a high quantity of impurities, including HCP. MabXpure™ resin used at ratio 1:5 (B) or 1:2.5 (C) allows a significant depletion of these impurities, without visible loss of IgG1. Protein A resin (D) purification shows a total depletion of impurities and a significant loss of IgG1. SDS-PAGE was performed using BioRad Criterion™ TGX™ system including Criterion™ Cell and Criterion™ TGX™ 4-15 % gels.

Transient transfection using FectoCHO® Expression System from Polyplus-Transfection® has successfully enabled expression with high titers of mAbs after 7 days of transfected cells culture. Thus, in order to preserve the benefits of a fast production system, the use of single-step/single-use flowthrough purification techniques was favored to “bind and elute” technologies that are greedy for handling multi-steps samples. DAISEP MabXPure™ has achieved high depletion rates, while ensuring good antibody recovery yields, which was the ultimate goal (mAb yield >90 %, HCP depletion >85 %, DNA depletion >99 %).
In the field of medium-scale recombinant proteins and antibodies production in suspension CHO cells, transient transfection using FectoCHO® Expression System can quickly and efficiently provide high mAbs titers. When combined with MabXpure™ purification technologies, it allows the compensation of expensive affinity resin use after a centrifugation step.