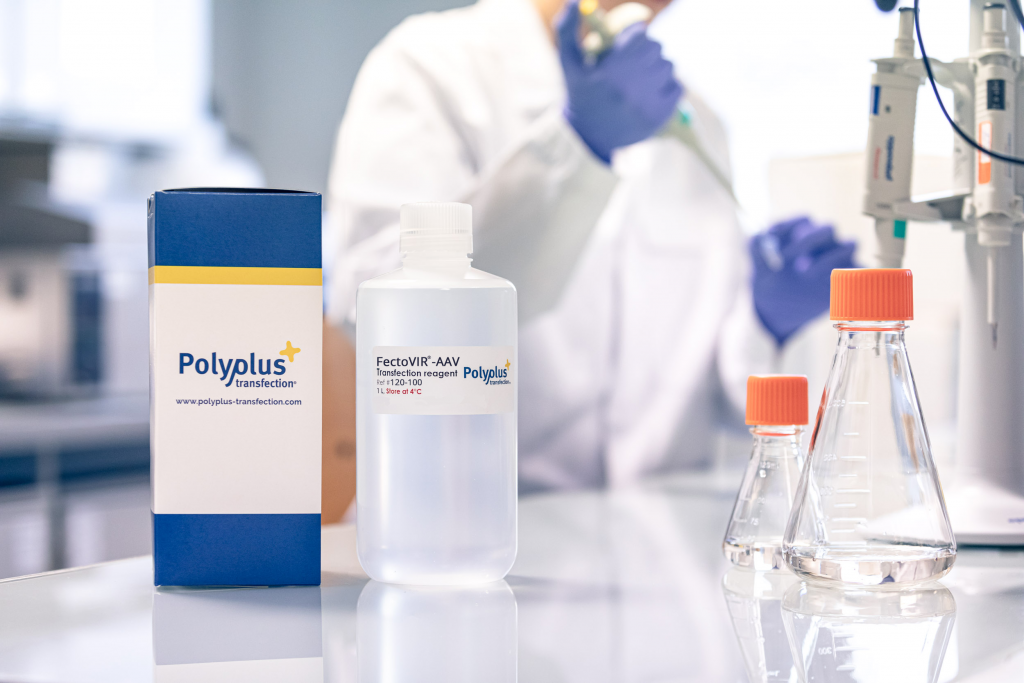 Adeno-associated virus (AAV) are recombinant viral vectors used to deliver corrective gene therapies into target cells, a promising approach to address a wide spectrum of monogenic diseases from blood disorders, neurological and ocular diseases. Initially discovered as a contaminant of adenovirus preparation [1], AAVs have been propelled to the center of the stage due to their unique biological and physical properties. AAVs are 25 nm small non-enveloped and replication-defective viruses that have yet to be linked to any known human diseases [2]. Unlike wild-type AAVs, recombinant AAVs (rAAV) are genetically modified to remove all viral coding sequences (rep and cap) of its 4.8 kb genome, thereby allowing the packaging of a transgene expression cassette of up to 4.4 kb in size [3]. Without its viral coding sequences, rAAVs function is restricted to being a protein-based nanoparticle that carries a DNA cargo into the nucleus of cells. In the absence of the replication gene (rep), the DNA cargo, once delivered into the nucleus, does not undergo site-specific integration into the genome of cells and instead persists as episomal DNA, as long as cells do not actively divide [4]. This latency as episomal DNA which permits long-term expression in cells largely contributes so far to the excellent safety profile and ensuing popularity of AAV-based gene therapy strategy.

The popularity of AAV-based gene therapy is also attributable to the existence of numerous AAV variants with tissue and cell specific tropisms. With the identification of a human cell line that could not be transduced by the first characterized AAV-2 [5], research on the transduction mechanism of AAVs led to identification of a combination of cellular receptors and co-receptors for AAV-2 to gain entry into cells. This led to the identification of presently 13 naturally occurring human and primate AAV serotypes (AAV1-AAV13) and more than 100 AAV variants across animal species [6]. AAV serotypes can be chosen for their tropism with the ability to preferentially transduce a cell or tissue type or their ability to have a broad tropism. For example, AAV2 with a known broad tropism has been approved as a viral vector for the treatment of an inherited form of retinal disease (Luxturna®), while AAV serotypes with a more specific tissue tropism have been approved for the treatment of inherited lipoprotein lipase deficiency (AAV1; Glybera®) and more recently inherited spinal muscular atrophy (AAV9; Zolgensma®).

With the increased number of therapeutic rAAV applications reaching clinical trial, and the high doses of rAAV often being administered, production of rAAVs in sufficient amounts within acceptable cost limitations has become critical. rAAVs are mainly produced in human HEK-293 cells. This requires the transfection of HEK-293 cells with up to three plasmids containing elements needed for AAV viral vector assembly, with a plasmid carrying the transgene expression cassette, a plasmid carrying the rep/cap genes and a third plasmid containing helper genes, provided by adenovirus or herpes virus [4]. Co-delivery of these plasmids in cells is determinant to produce functional viral particles. The transfection method is therefore critical to ensure efficient co-delivery, in as many cells as possible and last but not least in a reproducible manner to ensure robust production yields irrespective of the manufacturing scale.

Currently, viral vector manufacturers are switching from adherent cell systems to suspension cell systems to reach higher production rates per batch and to develop flexible and scalable manufacturing processes [7]. To support this transition, there is a demand for a transfection reagent that can support scale-up of rAAV manufacturing by fulfilling the following criteria: (i) improve rAAV viral vector yields, (ii) ensure process scalability for large scale manufacturing, (iii) improve batch to batch reproducibility, and (iv) importantly comply with quality and regulatory requirements for GMP manufacturing and commercialization. Polyplus-transfection’s latest innovative transfection reagent, FectoVIR®-AAV, addresses many of these requirements [8]: it is a novel class of animal free transfection reagent that is specifically developed for large scale transfection in suspension cell systems. Due to its particular physico-chemical properties, FectoVIR®-AAV can improve productivity at large scale, decrease batch to batch variability and simplify scale-up with a large-scale transfection protocol that addresses time and volume constraints [7].

Allergan Biologics, an Abbvie company, is a Centre of Excellence for Biologics R&D, with a focus on the development and manufacture of gene therapy products. Due to their strong interest in the investigation of innovative technologies, Allergan Biologics recently tested FectoVIR®-AAV against their AAV production platform in place. Comparison of FectoVIR®-AAV and another transfection reagent, referred subsequently as “market alternative”, was achieved side-by side with PEIpro®. PEIpro® transfection reagent (Polyplus-transfection) is optimized for small to large scale transfection of both adherent and suspension HEK-293 cells, for the manufacturing of viral vectors such as lentivirus, AAVs and virus-like particles. Since the availability of GMP (Good Manufacturing Practices)-compliant PEIpro® in 2018, PEIpro® has become the first PEI-based transfection reagent that can accompany viral manufacturers from process development to commercialization.

For viral manufacturers, the current challenge is to optimize AAV production platforms by reaching high production yields in HEK-293 suspension cell culture systems. In comparison to PEIpro® and the market alternative, FectoVIR®-AAV improved AAV productivity when tested against Allergan Biologic’s rAAV production platform. AAV production yields were assessed by measuring physical titer in both viral particle (VP) and genome copies (VG) number per milliliter of harvested cell culture. FectoVIR®-AAV led to approximately a 3-fold increase in physical titers as measured in VP/ml and VG/ml compared to PEIpro®, and was also superior to the market alternative (Figure 1 & Figure 2). In addition, cell viability at the time of harvest was measured following transfection with PEIpro®, FectoVIR®-AAV and market alternative. In all cases, cell viability was above 80% at harvest (Figure 3). A high viability at harvest has the potential to positively impact downstream processing due to an improved impurity profile. 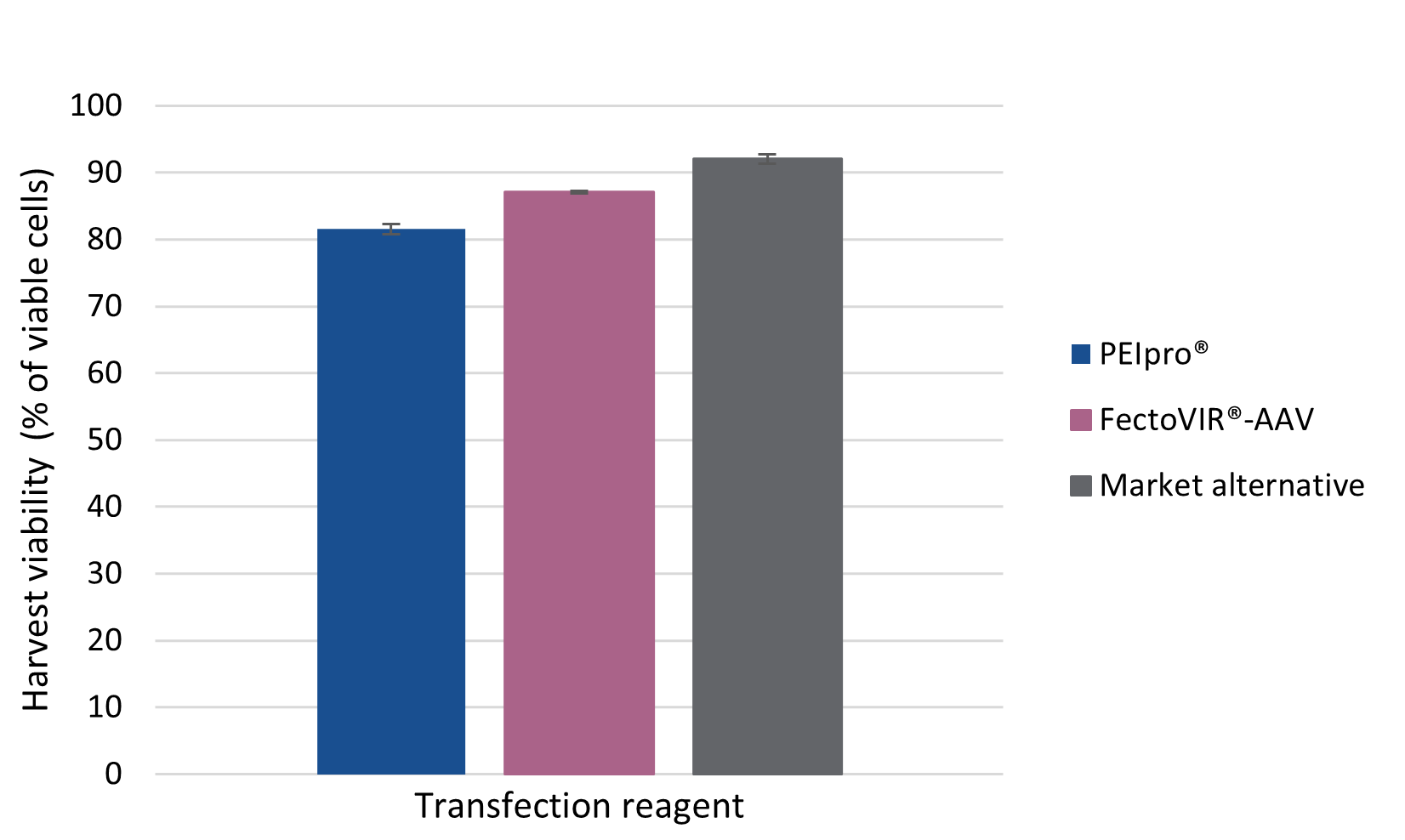